The need for a parish for English-speaking Catholics in the west end became a necessity during the episcopacy of Bishop George Aloysius Carrell. The Cathedral Parish, then located on 8th Street, could no longer accommodate its growing congregation. Before the project could be undertaken, however, Bishop Carrell died in September 1868. Two years passed before Covington’s second Bishop, Augustus Maria Toebbe, arrived on the scene. Among Bishop Toebbe’s first acts was to established St. Patrick Parish.

Father James Smith, assistant pastor at the Cathedral Parish, was appointed the first pastor. Smith was a native of Ireland and was ordained for the Diocese of Covington in 1866. Father Smith immediately began raising funds for the construction of a church. The site for the new parish was on Philadelphia Street at Elm (this property had been purchased by the diocese in 1868). The cornerstone of the new structure was set in place on August 28,1870 and the building was dedicated on August 22, 1872. The church was built of brick in the Gothic Revival Style and cost $40,000 to construct. Louis A. Picket, a local architect, designed the structure. The congregation held a membership of 125 families

In 1875, a two-story brick addition was constructed on the rear of the church building for use as a rectory. In the following year, a parish school was established. The school was held on the first floor of the rectory and was taught by laywomen. This initial attempt at operating a school lasted until 1886. Despite the loss of the school, St. Patrick Parish flourished. By 1887, membership had increased to 300 families.
Another attempt at establishing a parish school occurred in 1891. This attempt proved successful. That year, a two-story frame schoolhouse containing four classrooms was constructed on a lot adjacent to the church. Father Smith arranged for the Sisters of Charity of Nazareth to staff the school which boasted an initial enrollment of 234 pupils.

In the year 1900, the parish financed an addition to the parish rectory. The addition included a kitchen, bathroom, and bedroom. This space was needed for the assistant pastor who had arrived in the parish in 1891.

In 1897, the parish installed eight new art glass windows in the church. The windows depicted the following scenes: Immaculate Conception, Jesus and the Little Children, Sister Margaret Mary, St. Anne, St. Martin and the Beggar, Holy Family and Jesus, Mary and Martha. Other improvements at this time included new Stations of the Cross and frescos.

Growth in the parish resulted in overcrowding in the parish school. In 1905, Father Smith purchased an additional piece of property for school purposes and began preliminary plans for the construction of a new building. These efforts were encouraged when the parish received a donation of $2,000 from Nicholas Walsh for the building fund. Father Smith, however, would never see the new St. Patrick School. He died on February 28, 1908, and was laid to rest in a special crypt in St. Patrick Church. Smith was succeeded by Father James Cusack as pastor. Father Cusack’s pastorate, however, was cut short by his death in 1913.

St. Patrick’s third pastor, Father Thomas J. McCaffrey, was a native of Ireland. Under McCaffrey’s guidance, the new St. Patrick School was completed in November 1913. The school was designed by architect David Davis and contained six classrooms, an auditorium and a gymnasium.

In 1917, stone was placed on the exterior brick walls of the church. This improvement was followed by a complete restoration of the interior in 1921, which included new pews and tile floors, frescos by artist Nino Passalaqua, and two large murals by artist Charles Svendson. The cost of the restoration reached $16,000. The beautifully restored building was ready for the golden jubilee of the parish in 1922. At this time, parish membership stood at 450 families.

In the early years of the parish, the Sisters of Charity of Nazareth who taught in the parish school resided at La Salette Academy on Covington’s east side. In 1928, the parish constructed a new convent for the sisters of 4th Street near St. Patrick School. The modern two-story brick house included a chapel for the sisters’ private use. Total cost for the new convent amounted to $24,000.

St. Patrick Church and School were built on low ground near the Ohio River. Due to its location, the parish suffered damaged from several floods. None, however, compared to the great flood of 1937. St. Patrick Church, School, rectory and convent all were damaged by high water. 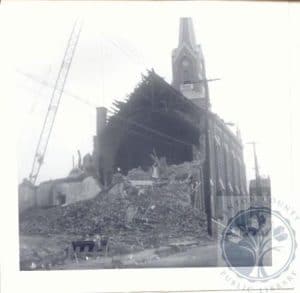 In the years following World War II, the neighborhood around St. Patrick Church changed dramatically. The new suburbs south of Covington attracted many long-time parishioners. They were replaced to a large extent by non-Catholic Appalachians who moved to the area for employment opportunities. St. Patrick Parish did try to reach out to these newcomers, but had little success. The congregation was dealt another blow in 1957, when Monsignor Thomas J. McCaffrey died. Monsignor McCaffrey had been pastor of the congregation for nearly 45 years. His successor was Father Raymond McClanahan.

During the 1950s and 1960s, the neighborhood lost many families due to the construction of the Internal Revenue Facility and Interstate 75. By the mid-1960s, parish membership had declined to 150 families. In 1967, Bishop Richard Ackerman officially closed St. Patrick Parish. Parishioners were encouraged to attend nearby St. Aloysius Church and School. St. Patrick Church, School, rectory and convent were demolished to make way for an automobile service station.