Holy Cross is a Roman Catholic Church located at 36th and Church Streets in Latonia, Kentucky. Holy Cross was founded as an outgrowth of the closest parish in the area, St. Augustine’s. The heavy German Catholic population of Latonia, however, found that St. Augustine’s was too far away from their homes and very hard to reach whenever the weather was bad. To rectify this problem, as early as 1887 several local Catholics began to collect money for the construction of a parish in Latonia. In 1889, Bishop Maes of the Covington Diocese approved of their efforts and instructed the pastor of St. Augustine’s to assist in the planning of Latonia’s parish.

Holy Cross church was constructed soon afterward in 1890 and assigned Rev. B.A. Baumeister as its first pastor. Final completion of the church proper took place in March of 1891. In the following years, several further additions were made by the fledgling congregation. The year 1891 saw the opening of the first classes at Holy Cross grade school, classes taught by the local Benedictine Sisters. In 1892, a parsonage was also constructed at one of the corners of the church’s property.

As the years progressed, both Rev. Baumeister and his replacement, Rev. Meinger came and left Holy Cross. The rapid turnover of pastors, however, came to an end on May 29th,1898 when Fr. J.B. Reiter took over the pastorate at the church. He would be pastor for 34 years.

It was under his rather long tenure that the city of Milldale, soon renamed Latonia, grew rather significantly in population. The increased numbers of residents, most of whom were Catholics, taxed the limits of Holy Cross’s seating capacity and thus required it to undergo several expansions in accommodation. During the early 1900’s, an entirely new church structure was planned and constructed near the site of the original one. It was completed in November of 1908 much to the delight of the local Catholic populace. Standing there to this day, the church is a Latonia landmark

The Holy Cross grade school underwent similar expansions as the 1900’s moved along. In 1913, after the school was reprimanded by the city health and inspection departments for various structural deficiencies, the first true schoolhouse was planned and constructed in 1914. Preceding this building, classes had been held all over the various church properties on 36th St. The new complex, on the contrary, was a place where all the functions of education could be placed under one roof. The Benedictine sisters from then would be teaching 8 full grades as more and more students began to enroll. High School courses were added to the curriculum within 10 years, and by 1930 an entirely free-standing High School had also been completed to provide for even more space in the rapidly growing parish.

Sadly, in 1932 during the Great Depression, Fr. Reiter died after 34 years of service at Holy Cross. The Church history mentioned that among other great sufferings that had happened to the community that year, a bank run in Latonia had completely wiped out all the savings of Holy Cross, a financial situation compounded by the high amounts of debt already owed by the church for its various expansions and educational developments. Needless to say, this was a massive tragedy.

Holy Cross did not fail, however, and Rev. Louis Fey soon replaced the deceased Fr. Reiter. Under Fr. Fey, the church’s debt was greatly reduced and a new convent was constructed for the sisters who had faithfully served the church and school. Fr. Fey also redecorated the church in 1951 with a variety of new artworks, new paint and various repairs to the nearly 50 year old church.

Fr. Fey himself died shortly thereafter in 1955. His replacement, Fr. Thomas Finn, was the first Irish pastor of Holy Cross. He too witnessed an increased need for further expanded educational facilities as his pastorate entered the 60’s, a need which he rectified by constructing a new high school. In 1961, he was also made a monsignor for his service to the church. Nonetheless, in 1968 he was replaced as pastor of Holy Cross by Rev. Robert Vater. Under Fr. Vater’s term, several other changes took place within the church, in particular the application of Vatican II regulations, reforms and liturgies that had begun under Fr. Finn earlier in the decade. Furthermore, the convent, by the late 70’s devoid of new nuns, was given to the local Catholic Social Services organization as their headquarters. 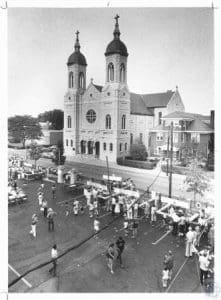 Fr. Vater was replaced in 1982 by Fr. Brink from Thomas More. Under his term, Holy Cross was made a diocesan district school and merged with many other local Catholic High Schools due to its string of decreasing enrollments during the 70’s and 80’s. Also during Fr. Brink’s tenure, a great debate began over his desire to further renovate the church. This debate carried over into Fr. Brink’s successor’s term when Monsignor Elmer Grosser took over the pastorate of Holy Cross in 1988. Renovation plans were finally passed in 1989 as the church approached its centennial birthday in 1990. Work went along according to plan until March 25th of 1990 when an electrical fire in the attic of the church caused $400,000 of damage to the interior and prohibited use of the recently renovated church for several months. By July 28th of the same year, however, Holy Cross was once again hearing Mass in the main body of the repaired and renovated church.

To this day, Holy Cross Church is a monument to the Catholic faithful in the city of Latonia. It remains, as the church history aptly pointed out, one of the greatest landmarks within the entire city.