The new congregation quickly purchased a parcel of land on Highway Avenue and work on constructing a new church was begun. The cornerstone was officially set into place on October 2, 1892. The first services in the new one-story frame structure were conducted on December 26, 1892. The building was dedicated on April 16, 1893.

The parishioners of St. John brought with them a great love for music and singing from their homeland. The fledgling community established a choir in 1893. In 1900, the congregation purchased a used pipe organ from a neighboring Covington congregation. The organ was dismantled, moved to West Covington, and re-assembled in the rear balcony of the church.

During the First World War, services at St. John began to be conducted in the English Language for the first time. This movement away from German Language services and music took place in many Northern Kentucky congregations. Residents of German heritage wanted to show their neighbors that they were loyal American citizens. 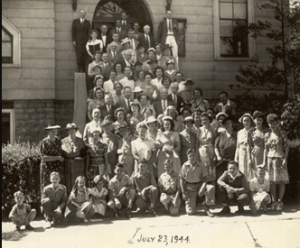 By 1923, the congregation had outgrown the original 1892 facilities. At this time, a new first floor was constructed under the original building. This new level provided ample classroom space and a large meeting room. The cost for the new addition amounted to $8,000. During the same year, the congregation became affiliated with the Congregational Christian Church. At this time the name of the parish was officially changed to: St. John Evangelical Protestant Congregational Church.

The congregation continued to grow in the 1950s. In 1959, ground was broken for a new classroom annex. The addition was dedicated on March 20, 1961. In the following, the interior of the church was greatly enhanced with the installation of colored glass windows. The 1950s also witnessed the merger of the Congregation Church and the Evangelical Reformed Church in the United States to form the United Church of Christ. The St. John Congregation decided to refrain from affiliating with the new denomination. Since this time, St. John has remained an independent, non-denominational congregation.

During the 1950s, the congregation sponsored a family of refugees from East Germany. The parishioners provided the family with a home and transportation. Once the family became financially stable, they were able to purchase a farm and home in Wisconsin.
Today, the congregation continues to meet the needs of its members and the broader community. Service has been a hallmark of the ministry conducted at St. John’s for over a century.