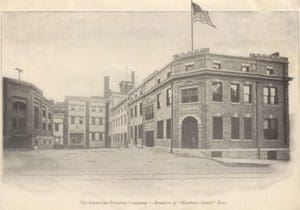 Bavarian Brewery can be traced back to the year 1866 when Julius Deglow and Charles L. Best began operating a small brewery on Pike Street in Lewisburg. In 1869, the brewery officially became known as Bavarian. William Riedlin and John Meyer were the next owners of the brewery. They purchased Bavarian in 1882. Seven years later, Riedlin became the sole owner. Anton Ruh was hired as the brew master.

Under William Reidlin’s ownership, Bavarian Brewer expanded rapidly. The first bottling plant at Bavarian was built in 1892 and was replaced in 1903. This two-story structure was modern in every detail and measured 46’ x 188’. At this same time a new stable was constructed to house the many horses needed to pull delivery wagons. A new four-story warehouse followed in 1905. By 1914, Bavarian Brewery was the largest such enterprise in the Commonwealth of Kentucky. The brewery occupied a 6 ½ ace site on Pike Street and was producing 216,000 barrels of beer each year. 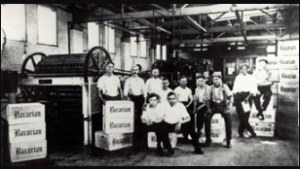 Bavarian continued to prosper until the era of Prohibition. In 1919 production at the plant shifted from beer to soft drinks. In 1925, the icehouse was sold to Joseph and Ferdinand Ruh who incorporated as the Kenton Ice Company. Bavarian re-opened in 1935. Over three thousand guests attended the grand opening. The officers at this time were: Murray L. Vorhees, Fred C. Faller, and Leslie S. Deglow. Three years later, William Riedlin’s four grandsons purchased the business for $55,000. Sales rose throughout the 1930s.

In 1949, officials of the Bavarian Brewery purchased the Heidelberg Brewery also of Covington. In the following year, they bought the Bruckman Brewery of Cumminsville. These purchases not only expanded Bavarian’s market, but also eliminated several local competitors. 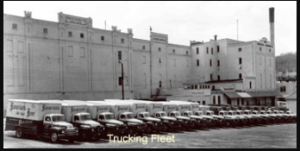 Bavarian, however, found it difficult to compete with the larger national brewers. In 1959 Bavarian became part of the International Brewing Company of Detroit. In order to improve the efficiency of the Bavarian plant, the new company constructed a new bottling facility on Pike Street in 1960. This building was constructed at a cost of $500,000. Despite this improvement, Bavarian lost money in 1962 and 1964.

The Bavarian Brewery Complex sat vacant for many years. In 1996, Ken Lewis purchased the property. Lewis intended to demolish the buildings and to construct a Party Source Store on the property. Instead, he deiced the remodel the buildings into a microbrewery called Brew Works. The Brew Works concept, however, was not successful. In 1998, the old brewery buildings were purchased by a Louisville Based firm named Jillian’s. The new owners transformed the complex into restaurants, a high tech bowling alley and a gaming facility. Jillian’s officially opened for business in December 1998.

The Bavarian Brewery property is now part of the Kenton County Government building. There is a historical exhibit where you can learn more about the brewery.