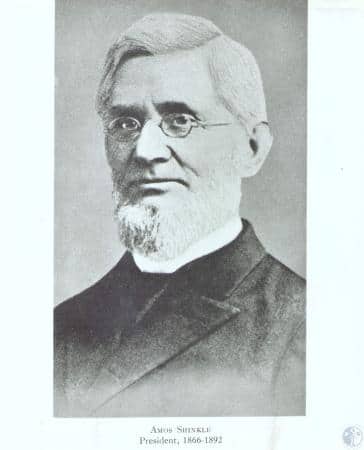 Covington entrepreneur and patron of the Methodist Church in the region. Amos Shinkle was born On August 11, 1818 on White Oak Creek in Brown County, Ohio. He was the son of Peter and Sarah Day Shinkle. Amos Shinkle received his education in the public schools of Ohio. At the age of 18, Shinkle began working on a flatboat as a cook. This contact with river travel was a harbinger for great things to come. In 1847, Amos Shinkle relocated to Covington. Shinkle established a coal business in Northern Kentucky. His business was a coal reloading dock for steamships plying the Ohio River. The endeavor proved very successful. Shinkle also constructed and sold a number of steamboats during this era.

In 1856, Shinkle became a major stockholder in the Covington and Cincinnati Bridge Company (Roebling Suspension Bridge). During this time the bridge was brought to completion. In 1864, Shinkle was elected president of the company. The bridge produced a large income for many years through the collection of tolls. Amos Shinkle was also active in numerous other business establishments in the region. In 1865, he established the Champion Coal and Towboat Company. He was also one of the organizers (and first president) of the First National Bank of Covington (1864) and president of the Covington Gaslight Company (1863). Shinkle served on the Covington City Council from 1853 to 1866.

He was also a member of the Covington School Board. As a school board member, Shinkle advocated the construction of several new schoolhouses. He was a member of the Board of Trustees of the Cincinnati Wesleyan Female College and the Freedmen’s Aid Society. Amos Shinkle was a fervent Methodist. He and his family retained membership at the Union Methodist Episcopal Church (First Methodist). He was superintendent of the Sunday school from 1867 to 1892. Shinkle made numerous donations to assist the Epworth Methodist Church (West Covington), Main Street Methodist Church (Covington) and Shinkle Methodist Church, named in his honor in 1892. In 1880, he purchased a lot on Madison Avenue and built the first Covington Protestant Orphanage utilizing his own personal funds. Shinkle made generous donations to Methodist congregations and institutions across the nation. Amos Shinkle married Sarah Jane Hughes on November 10, 1842. The couple had one child, Bradford (born September 29, 1845). The Shinkle family lived in various homes in the Covington area. In 1866, he built a large Classical Style summer home in what is today the City of Crestview Hills. In 1869, he built a large Gothic Style Mansion on 2nd Street in Covington as his main residence.

Amos Shinkle died on November 14, 1892. He was survived by his wife, his son and two grandchildren. Funeral services were conducted in the family home on 2nd Street. Burial was in Highland Cemetery, Fort Mitchell, Kentucky. Shinkle’s will indicated that his estate was worth $2.5 million. His fortune and real estate were left to his widow, son and grandchildren. Sarah Jane Hughes Shinkle died on December 18, 1908 at her home on 2nd Street. The pallbearers were: James Minor, D.E. Hemingray, Frank Rothier, F.A. Laidley, George Hamilton and William Fenley. Burial was at Highland Cemetery. Bradford Shinkle and his family lived in the 2nd Street home until 1914, when it was donated to the Salvation Army for use as a women’s home. The women’s home lasted only briefly. The home was then used as the original home of the new Booth Memorial Hospital (Salvation Army). In 1920, the home was demolished to make way for a new hospital building.