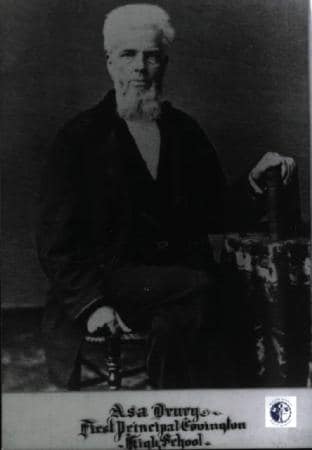 Asa Drury was born on July 26, 1802 at Athol, Massachusetts. He graduated from Yale University in 1829 and taught at the same institution from 1829 till 1831. At that time, Drury decided to study for the ministry. He was ordained by the Baptist Church in 1832.

Following ordination, Drury moved to Ohio and began teaching Greek and Latin at Denison University in Granville, Ohio. In 1835, he made another move – this time to Cincinnati, where he taught at Cincinnati College.

In 1845, Drury was among the first faculty members at the Western Baptist Theological Institute in Covington. Drury taught Theology at the institute. He was also responsible for the classical school attached to the seminary. Drury left the Western Baptist Theological Institute in 1853 to teach in the Covington Public High School.

On January 8, 1853, Covington High School opened its doors for the first time in the district elementary school building at 11th and Scott Streets. Drury was the first principal. Drury’s work was much appreciated by the members of the board. On January 26, 1856, he was named the first Superintendent of the Covington Public School System. Drury’s work as superintendent was exemplary. He was given several raises by the board. These raises, however, violated the charter of the school system (his salary had increased beyond the legal limit imposed by the school charter). In 1859, the members of the board reduced his salary so it would be in compliance with the charter. Drury resigned on the spot.

In 1859, Drury opened the Judsonia Female Seminary in the old Baptist Theological Institute building (the institute had closed several years earlier). In about 1865, Drury moved to Minneapolis, Minnesota, where he died on March 18, 1870. His body was returned to Covington and eventually laid to rest in Highland Cemetery, Fort Mitchell, Kentucky.