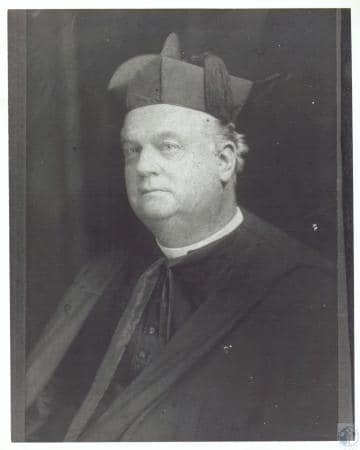 The fourth Bishop of the Diocese of Covington. Ferdinand Brossart was born on October 19, 1849 in Buchelberg, Bavaria. The Brossart family immigrated to the United States in 1851. They settled in Cincinnati and became members of St. Michael Parish. In 1861, the Brossart family relocated to Gubser’s Mill in rural Campbell County, Kentucky.

Ferdinand studied for the Diocese of Covington at St. Mary Seminary in Cincinnati and at the American College in Louvain, Belgium. Bishop Augustus Maria Toebbe ordained Father Brossart on September 1, 1872 at Old St. Mary Cathedral in Covington. Father Brossarts’s early assignments in the diocese included appointments as assistant pastor at Immaculate Conception Parish in Newport, pastor of St. Edward Parish in Cynthiana and pastor of St. Paul Parish in Lexington.

Father Brossart gained a high reputation during a cholera epidemic in Millersburg, Kentucky and a smallpox epidemic in Lexington, by sacrificing his own health to minister to the sick and dying. In 1888, Father Brossart was appointed the rector of the Cathedral Parish in Covington and Vicar General of the diocese. During this period, Father Brossart edited the diocesan newspaper under the title of the New Cathedral Chimes. Brossart also was one of the original members of the Covington Park Board.

In November 1915, Father Brossart was appointed the fourth Bishop of Covington. He was consecrated on January 25, 1916 by Archbishop Henry Moeller of Cincinnati. During his administration, Bishop Brossart worked diligently to bring the ornamentation of the Cathedral to completion. He oversaw the installation of many of the stained glass windows and the beautiful mosaic Stations of the Cross. Bishop Brossart resigned due to poor health in March 1923. He resided at St. Anne Convent in Melbourne, Kentucky, where he died on August 6, 1930. He was laid to rest at St. Anne Convent Cemetery in Melbourne.

Archives of the Diocese of Covington.