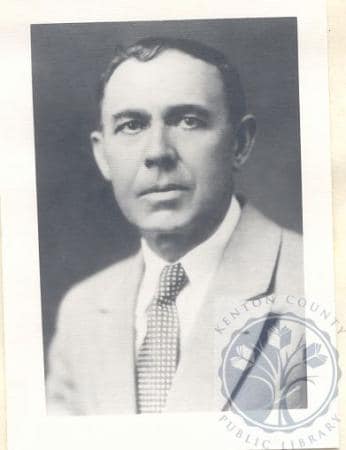 A Lewisburg merchant and politician. Charles Zimmer Sr. was born on April 5, 1868 in Cincinnati, Ohio to John Zimmer and Barbara Metz Zimmer. Five brothers and sisters were quickly added to the family: Rose, Joseph, Susan, Ann and William. The young family soon moved to the Lewisburg neighborhood of Covington. The first residence in Lewisburg was on Worth Street near the old St. John Church.

On May 17, 1892, Charles Zimmer married Frances Bockweg (1869-1950) at St. John Church. The couple rented an apartment on Baker Street. At about this time, Charles began working in the grocery store of his brother-in-law, Henry Bockweg. A few years later, Charles Zimmer struck out on his own and opened a small grocery on Hermes Avenue. He and Frances lived in a small apartment located above the grocery. In time, a second grocery was established at the corner of Lewis Street and Western Avenue.

The living quarters above this store were larger, and thus became the family home. In 1904, Charles Zimmer opened a third store in Lewisburg. This store, located at 704 Pike Street, sold hardware. The business became known as the Charles Zimmer Hardware Store. The hardware store grew very quickly. Within a few years, the store moved to larger quarters at 600 Pike Street. In addition to his grocery stores and hardware establishment, Charles Zimmer also found time to help establish the Western German Savings Bank in 1908. Eventually the bank built a permanent structure at the corner of Pike and 9th Streets. The name of the bank was changed to Security Savings Bank during the anti-German hysteria of the First World War. Charles Zimmer was a director at the bank until 1934.

By 1910, Charles and Frances were the parents of nine children: Lauretta, Olivia, Charles Jr., Clara, Edgar, Gertrude, Barbara, Humbert, and Paul. Paul, the last child, was born in the Zimmer’s new home at 712 Pike Street (the site of the former Seiler Brewery). The Zimmer Hardware Store did a good business in the early years of the 1900s. Charles decided to sell the two groceries and devote his entire attention to the hardware business. Zimmer also added automobile supplies and a repair shop to the facilities. On April 2, 1925, the Zimmer Hardware Store was partially destroyed by fire. A new store, however, was quickly constructed at 537-539 Pike street. The new brick building measured 135 x 50’ and was officially opened in November 1925.

The closing of the Bavarian Brewery in 1919 offered Charles Zimmer another business opportunity. In 1926, he purchased a parcel of this property and began planning for the construction of a new residential street. He named the street Riedlin Avenue after William Riedlin, the long-time owner of the brewery. Ten homes were eventually built on this street.

Charles Zimmer entered the political realm in 1929. He ran on a ticket for a seat on the Covington City Commission. The ticket included: Louis Meyer, M. Swindler and Joseph Pieper. The four candidates promoted a city manager form of government for Covington. The ticket was successful and a city manager form of government became a reality. Charles Zimmer was officially sworn in on January 1, 1930 as the safety commissioner (he was in charge of the police and fire departments). His political career, however, was a short one. Zimmer resigned his commission set on December 18, 1930. The year 1930 was also marked by the transfer of the hardware store from Charles Zimmer Sr. to his two sons: Bert and Charles Jr. (Carl). At this time Charles Zimmer Sr. retired. Charles Zimmer Sr. died on March 8, 1942. His wife, Frances Zimmer, followed him on August 6, 1950. The couple is laid to rest at St. John’s Cemetery in Fort Mitchell, Kentucky. Bert and Charles Jr. sold Zimmer Hardware in 1964 to Bob and Emily Von Holle.