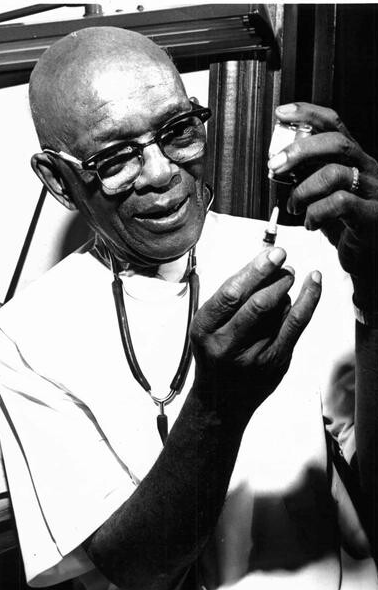 African American physician and community leader. James E. Randolph was born on January 17, 1888 in Frankfort, Pike County, Missouri. He was the grandson of a slave. Randolph attended Lincoln University at Jefferson City, Missouri and earned his medical degree at Meharry College in Nashville, Tennessee in 1917. He then began practicing in Shelbyville, Tennessee, where he met his first wife, Sarah. Sarah Randolph died on January 21, 1959 in Covington, Kentucky. She was 60 years of age. He later married Loretta Spencer of Frankfort, Kentucky. Loretta Spencer Randolph died in 1975. In 1922, Dr. Randolph moved to Covington. He immediately established his practice 1039 Greenup Street. In 1950, he moved the practice to 1002 Greenup. He was the first African American physician to be on the staff of St. Elizabeth Hospital in Covington and the first African American physician to be a member of the Campbell-Kenton Medical Society. A large percentage of the African American babies born in Covington between 1922 and 1958 were delivered by Dr. Randolph. Dr. James E. Randolph received several honors in recognition of his work in the community. In 1976, La Salette Academy awarded the doctor with a gold medal for his service to the community in the field of science. The City of Covington also named a park in the Eastside Neighborhood in honor of Dr. Randolph in 1975. In 1997, he was posthumously inducted into the Northern Kentucky Leadership Hall of Fame. Dr. Randolph was an active member of St. James A.M.E. Church in Covington. He also served as President of the Kentucky A.M.E. Organizations of Lay Members. Dr. James E. Randolph died on May 23, 1981 at the Baptist Convalescent Center in Newport, Kentucky. He was survived by a sister, three nieces and three great-nieces. Funeral services were conducted at St. James A.M.E. Church in Covington with burial at the Mary Smith Cemetery in Elsmere, Kentucky.