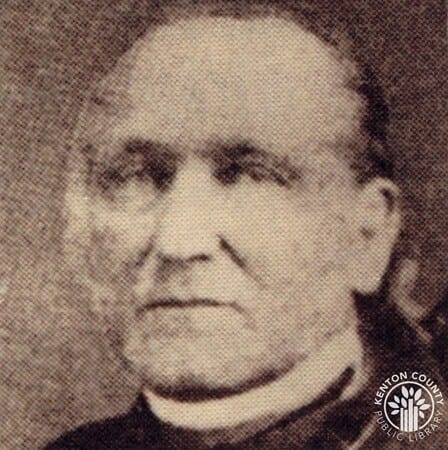 The first Bishop of the Diocese of Covington. George A. Carrell was born on June 13, 1803 in Philadelphia, Pennsylvania. His grandfather, a native of Ireland, came to this country before the Revolutionary War. After attending the seminary at St. Mary College in Emmitsburg, Maryland and Georgetown College in Washington D.C., he was ordained to the priesthood on December 20, 1827 at St. Augustine Church, Philadelphia. In 1835, Carrell became a member of the Society of Jesus (Jesuits). He was appointed president of the Jesuit run St. Louis University in 1843. In 1847, he was transferred to Cincinnati and assigned to St. Xavier Preparatory School. Two years later, he was appointed president of the same institution. Father Carrell’s last appointment in Cincinnati was that of rector of St. Xavier College, a position he held from 1851 until his appointment as Bishop of Covington on July 29, 1853. Bishop Carrell was consecrated on November 1, 1853 by Archbishop John Purcell of Cincinnati. Carrell oversaw the organization of the diocese, the expansion of parishes and schools, the founding of St. Elizabeth Hospital and the construction of the first cathedral. Carrell was also responsible for the establishment of the Benedictine Sisters in the Diocese. Bishop George Aloysius Carrell died on September 25, 1868 in Covington. Initially, he was laid to rest in a vault at the old St. Mary Cathedral on 8th Street. When this building was demolished, his remains were removed to St. Mary Cemetery in Fort Mitchell, Kentucky. Archives of the Diocese of Covington.