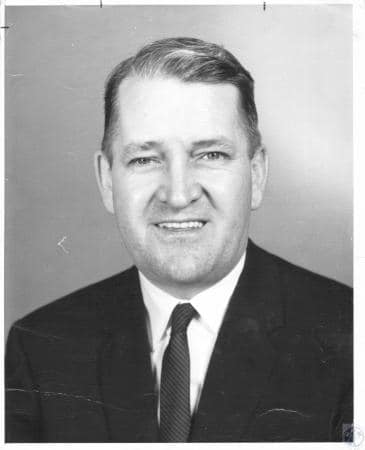 A West Covington native, state legislator and journalist. August ‘Gus’ Sheehan was born on April 30, 1917 to August Sheehan Sr. and Louise Barkhau Sheehan. Sheehan attended the University of Cincinnati and Xavier University. He earned a degree in law from Salmon P. Chase College Law School. He married Mary Catherine Welp in 1950. Sheehan began publishing the News Enterprise in 1936. The paper, based in the nearby City of Ludlow, carried news concerning Ludlow, Bromley, West Covington and several other small northern Kenton County communities.

Sheehan not only wrote most of the stories for the paper, but also managed sales and circulation. In 1991, Clabes and Steppingstone Publications purchased the News Enterprise from Sheehan. Gus Sheehan was also a very popular Northern Kentucky politician. He served as a Kentucky State Representative from 1950-1952. In 1958, Sheehan was appointed Kenton County Commonwealth Attorney to fill an un-expired term (his bid to be elected to the post later in that same year was unsuccessful). Sheehan again served as a Kentucky State Representative from 1963 to 1966.

He also served as a Kentucky State Senator from 1972-1988. Gus Sheehan was a member and past president of the Kenton County Democratic Club. Sheehan was also very involved in civic affairs. He was a member of the Kelly Furnish Veterans of Foreign Wars, the Sunday Morning Club, the Standard Club, and the Kehoe Council Knights of Columbus. Sheehan died in October 2000 at the age of 83. His wife had preceded him in death. He was survived by his four children: Judge Martin Sheehan, Joyce Vogelpohl, Janet Cordiviola and Patricia Sheehan. A funeral Mass was held at St. Ann Church in West Covington with burial at St. Mary Cemetery in Fort Mitchell, Kentucky.