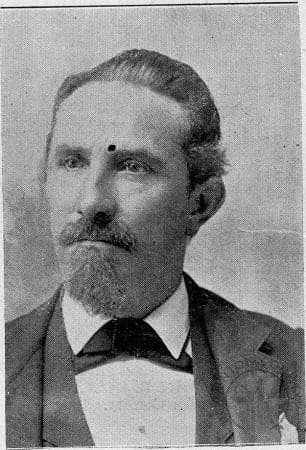 A noted Covington lawyer and Kenton County Attorney. Henry J. Gausepohl was born on December 20, 1845 in Covington. His parents were J. Bernard Gausepohl and Mary J. Hugenberg Gausepohl. Henry J. Gausepohl received his early education in Covington. He then attended St. Xavier College in Cincinnati. Following graduation from college, he worked as a clerk in a drug store. In 1865, he established a hat store on Pike Street in Covington. While operating this store, Gausepohl studied law at the Cincinnati Law School (1879-1881). He earned his law degree in May 1881 and accepted by the Covington Bar in that same year. For many years, Gausepohl successfully practiced law in Covington. He also served for a period of time as County Attorney of Kenton County. Gausepohl was also active in banking. He was a major stockholder of the Covington Farmers and Trader’s Bank. He was also the chief attorney for the following Covington building associations: Germania, Columbia and Grand Central Building Associations.

Henry J. Gausepohl married Josephine Bohman on November 6, 1872. The couple had four children: Flora, Charles, Clara and May. The family resided at 2114 Oakland Avenue in Covington. Henry J. Gausepohl died on May 6, 1913 at the age of 67.He was survived by his widow and four children. The funeral Mass was celebrated at St. Benedict Church in Covington with burial at St. Mary Cemetery in Fort Mitchell, Kentucky. Battle, Perrin & Kniffin,