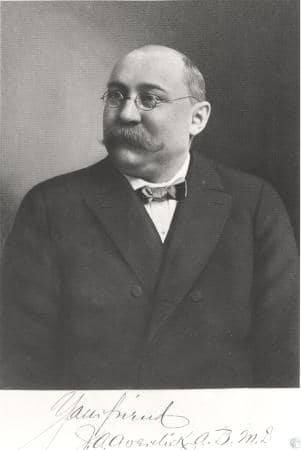 A Covington physician, school board member and Kentucky Legislator. James A. Averdick was born on December 25, 1852 in Cincinnati, Ohio. He parents were Dr. H.G. Averdick, an immigrant from Hanover and Joanna Eagan Averdick a native of Ireland. Two years after James’ birth, the family moved to Oldenburg, Indiana. James A. Averdick was educated at St. Mary’s Institute in Dayton, Ohio in 1872 (later renamed the University of Dayton). He was also a graduate of the Ohio Medical College in Cincinnati.

In 1873, Averdick began practicing medicine in Covington. In 1874, he married Clara Ertel at St. Mary’s Church in Oldenburg, Indiana. The couple had no children. They resided at the northeast corner of 8th and Bakewell Streets in Covington. James Averdick served in the Kentucky Legislature for two terms and was the Kenton County Coroner for one term. He was also a member of the Covington Board of Health. His greatest contribution to Covington, however, was his service as a member of the Board of Education for over four decades. Averdick began serving on the board in January 1886 and remained a member until his death in 1931. He is the longest serving member of the board in Covington Public School history. During these years of service, the Covington Public Schools expanded in scope and professionalism. Averdick took great interest in the construction of new public school buildings. His attention to detail and good business sense allowed the district to build numerous structures that were both modern and affordable.

James A. Averdick was a member of St. Aloysius Church. He was also an active member of the Catholic Knights of America, the Knights of Columbus and the St. Aloysius Benevolent Society of Covington. He practiced medicine in Covington from 1873 until 1931. For a number of years, he was Chief of Staff at St. Elizabeth Hospital in Covington. In 1928, his alma mater, the University of Dayton, presented him with an honorary doctor of law degree in recognition of his many civic, religious and professional activities. Averdick’s wife, Clara Ertel Averdick died on February 18, 1922. In 1925, James A. Averdick married his second wife, Ella Stearns Venter at St. Benedict Church in Seattle, Washington. Ella Averdick died several years later. James Andrew Averdick died on August 1, 1931 in Covington. Funeral services were conducted at St. Aloysius Church in Covington. Burial was at the Catholic Cemetery in Oldenburg, Indiana.