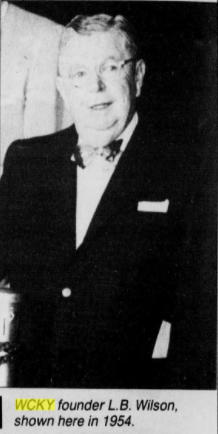 Covington native, entertainer, founder of WCKY Radio and theater owner. L.B. Wilson (Lyda Beall) was born in Covington on May 20, 1891. His parents were Wesley Berry Wilson (1853-1912) and Lydia Miles Wilson (1856-1891). L.B. Wilson was educated in the Covington Public Schools. He graduated from Covington High School in 1910. Following graduation, L.B. and his brother Hansford Wilson joined a theatrical troop and toured Europe.

He returned to Covington in 1912 and began working as the manager of the Colonial Theater. He operated the Colonial until 1913, when he opened a cigar shop at the corner of 6th and Madison Avenues. This smoke shop became a popular meeting place for the politicians and business owners of Covington. Wilson learned much about business from his customers. By 1915, L.B. Wilson had been elected secretary of the Covington Industrial Club. He remained in that position for eight years. In 1929, he was named president of the club. The Covington Industrial Club later evolved into the Covington Chamber of Commerce. L.B. Wilson maintained a long business relationship with Senator Richard Pretlow Ernst, Frank Thorpe, Polk Laffoon and George L. Hill. This group two operated a chain of movie theaters in Covington, including the Liberty Theater (1923), Lyric Theater (this theater was renamed the L.B. Wilson Theater in 1928), Rialto, Strand Theater and the Hippodrome Theater. Wilson promoted his theaters with contests and other novelties. For a number of years, he sponsored contests that awarded new automobiles to lucky theater-goers.

In 1926, L.B. Wilson and Senator Richard Pretlow Ernst purchased controlling interest in the People’s Saving Bank and Trust Company of Covington. In 1928, the bank was merged with the Liberty National Bank. Senator Ernst was appointed President of the new bank at that time and L.B. Wilson was appointed Executive Vice President. The new People’s-Liberty Bank and Trust Company became the largest bank in Kentucky outside the City of Louisville.

In 1928, L.B. Wilson began to plan for the creation of a radio station in Northern Kentucky. The new station, WCKY, began operation on September 16, 1929, in a building on Madison Avenue across the street from Wilson’s Liberty Theater. The station was on the cutting edge from the beginning. In the first three months of operation, WCKY aired a soap opera, a live race from Latonia Race Track and a show featuring live on the street interviews. Originally, WCKY operated on 5,000 watts. In 1937, the wattage was increased to 10,000. In 1939, WCKY increased its station’s power to 50,000. That same year, the station moved to new studios in Cincinnati at the Gibson Hotel.

On October 7, 1929, Wilson married Constance Freshwater (stage name Jean Oliver) at the Book Cadillac Hotel in Detroit, Michigan. She was a native of San Francisco and an actress. The couple purchased a home on Summit Lane in Fort Mitchell. They had no children. The couple separated on June 28, 1948. Wilson was also involved in the following concerns: Cincinnati and Covington Bridge Corporation, Stanwood Boiler Corporation, Churchill Downs Race Track, Lincoln Fields Race Track (Crete, ILL.) and the Doerman-Roher Co. Wilson was also active in fraternal organizations, including the Elks and the Masons. L.B.Wilson died on October 28, 1954 in Cincinnati. He was survived by his estranged wife, his Brother Hansford, two nephews and a niece. He was laid to rest in Miami, Florida. At the time of his death, his estate was valued at $4.2 million.