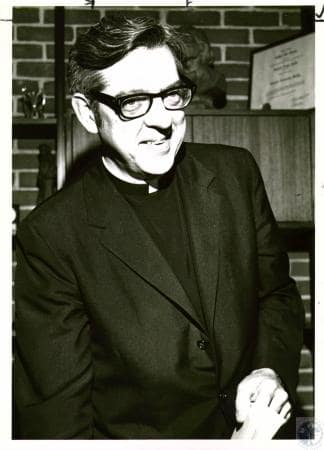 Long-time President of Villa Madonna-Thomas More College in Northern Kentucky and religious and civil rights leader. John F. Murphy was born on February 25, 1923 in Lexington, Kentucky. He received his elementary and secondary education at St. Catherine Academy in that same city. Following high school, Murphy decided to explore a vocation to the priesthood. He earned a bachelors degree in 1946 from St. Meinrad College in St. Meinrad, Indiana and a Licentiate in Theology in 1947. Murphy was ordained to the priesthood in 1947 by Bishop William T. Mulloy at St. Peter Church in Lexington.

In time, Father Murphy earned a doctorate from the Catholic University of America in Washington D.C. In 1948, he was appointed to the faculty of Villa Madonna College in Covington. Only three years later, Murphy was named the Dean of the college. In 1953, he was appointed President of Vila Madonna College. He was one of the youngest college presidents in the country at that time. Msgr. Murphy expanded course offerings and the number of departments. He also oversaw the expansion of the number of faculty and staff at Villa Madonna. Murphy was also responsible for the creation of a Board of Oversees at the college. This Board of Overseers eventually evolved into a modern function Board of Trustees with membership drown from the clergy, women religious and laity. His greatest achievement, however, was the construction of a new college campus in the suburban City of Crestview Hills in 1967-1968.

President Lyndon Baines Johnson was present for the dedication of the new campus. It was also during the tenure of Msgr. Murphy that the college changed its name from Villa Madonna to Thomas More College. During the late 1960s, Msgr. Murphy was appointed the first Chairman of the Covington Human Rights Commission (later the Kenton County Human Rights Commission). In this role, Msgr. Murphy was instrumental in the passing of an open housing law in Covington. He also worked with the other members of the commission to bring about better understanding and cooperation between the races. In 1971, Msgr. Murphy resigned as President of Thomas More College to assume the position of Vice President at Catholic University of America.

In 1980, he returned to Northern Kentucky to become the first Director of the Diocese of Covington Planning Office. Two years later he was named the pastor of St. Agnes parish in Fort Wright, Kentucky. He retired in 1992. Msgr. Murphy died in a tragic automobile accident on the AA Highway near Foster Kentucky on August 1, 2001. A car coming in the opposite direction crossed the yellow line and collided with Msgr. Murphy’s automobile head-on. He was killed instantly. Mass of Christian Burial was held at St. Agnes Church in Fort Wright with burial at Calvary Cemetery in Lexington.