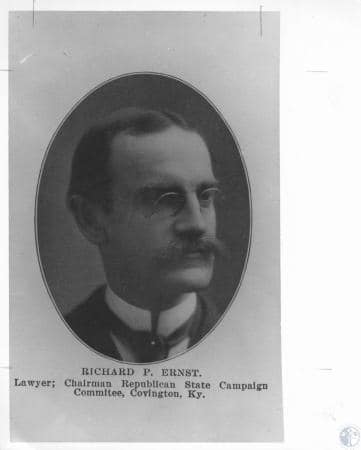 A life-long resident of Covington and former United States Senator. Richard Pretlow Ernst was born on February 28, 1858 in Covington. His parents were William Ernst and Sarah Butler Ernst. William Ernst was a past president of the Northern Bank of Kentucky and president of the Kentucky Central Railroad. Richard Pretlow Ernst was educated in the public schools of Covington and at the Chickering Academy in Cincinnati (graduated in 1874). Ernst earned a bachelors degree from Centre College in Danville, Kentucky in 1878. He received a law degree from the University of Cincinnati in 1880. That same year, he began practicing law in Covington and Cincinnati. He was a member of the Firm of Ernst, Cassatt & Cottle. Ernst married Susan Bent in 1886. The couple had two children: William Ernst and Sarah Ernst Darnell. Richard P. Ernst’s first venture into politics occurred in 1888, when he was elected to the Covington City Commission. He served in this position until 1892. In 1896, Ernst ran unsuccessfully for a seat in the United States Senate on the Republican ticket. Ernst successfully ran for the U.S. Senate in 1920. He served in that position from March 4, 1921 to March 3, 1927. His bid for re-election in 1926 failed. Ernst returned to Covington in 1927 and resumed his law practice. He was active in many fraternal and professional groups in the Greater Cincinnati area. Ernst was chairman of the board of directors of Liberty National Bank in Covington; a member of the Hamilton County and Cincinnati Bar Associations; and a member of the Queen City Club of Cincinnati, the Covington Industrial Club and a 32nd degree mason. Ernst also served on the boards of Centre College, Danville; the University of Kentucky in Lexington; Pike County College, Pikeville, Kentucky and Western College for Women at Oxford, Ohio. Ernst was a dedicated member of the First Presbyterian Church of Covington. In 1895, he succeeded his father as superintendent of the churches’ Sunday school, a position he would hold until the time of his death. Ernst was also very active in the Y.M.C.A. movement. He served as president of the Covington Branch for 43 years. He donated approximately $100,000 to build a new Y.M.C.A. facility on Madison Street in 1913 and to construct an addition to the facility in 1930. In his will, Ernst set aside 500 shares of Procter & Gamble Stock as a trust for his close relatives. When the last designated relative died, the remaining funds were to be equally divided between his daughter Sarah and the Covington Y.M.C.A. The Y.M.C.A. received their portion of the trust in 1983 ($350,000). Richard Pretlow Ernst died on April 13, 1934 at John Hopkins Hospital in Baltimore, Maryland. He is buried at Highland Cemetery in Fort Mitchell, Kentucky. Kentucky Post, April 25, 1983; National Cyclopedia of American Biography, pp. 388-89; Connelley, William Elsey, History of Kentucky (Chicago: American Historical Society) 1922; Biographical Directory of the American Congress, p. 917.