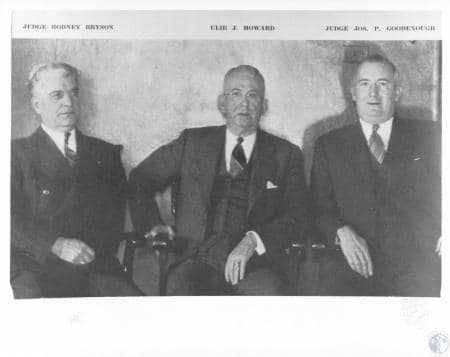 In 1894, he began attending Centre Law School in Danville, Kentucky. Ulie J. Howard passed the bar in 1895 and began practicing law in the growing City of Covington, Kentucky. In 1901 he joined in a partnership with attorney Harvey J. Myers The Firm of Myers & Howard became one of the most prominent in Northern Kentucky. Howard remained in this partnership until the death of Harvey Myers in 1933. At that time, Howard established a firm with his son. His offices were in the Coppin Building at the northeast corner of Madison and 7th Street.

Howard married Carrie Brent Alexander, a native of Paris, Kentucky, on April 21, 1897. The couple had one child, Charlton Howard, who was born on December 23, 1900. The couple lived at 312 E. Second Street in Covington. In 1917, Carrie Howard died. Ulie J. Howard’s second wife was Aileen Brown. In 1922, Howard moved to the growing suburb of Fort Mitchell, south of Covington.

Ulie J. Howard was a member of the First Presbyterian Church of Covington. He was also active in the Kenton County Bar Association, was the president of the Kenton County Home Society, served on the Covington Parks Board and was a member of the Covington Masons, Elks and Eagles. In addition, Howard was a charter member and first secretary of the Fort Mitchell Country Club. In 1927, Howard was elected Kenton County Commonwealth Attorney on the Democratic ticket. He was quoted as saying, “I always vote for the best man, and I always find him on the Democratic ticket.”

Ulie J. Howard was embroiled in a political controversy in 1946. That year, the newly formed Kenton County Protestant Association became concerned about the alleged gambling in the county. A number of ministers collected evidence about illegal gambling and turned it over to the United States District Court. The court ruled in the ministers’ favor and barred Howard from practicing in the U.S. District Courts (the ruling did not bar him from practicing in the county court system, thus, Howard remained Commonwealth Attorney). Howard held the post of Commonwealth Attorney until his death on October 17, 1947. He was 76 years old. His widow, Aileen Brown Howard and one stepson, William B. Southgate, survived him. Howard’s son, Alex, a state senator, died in c. 1946. Funeral services for Ulie J. Howard were held in the family home with burial at Highland Cemetery, Fort Mitchell, Kentucky.