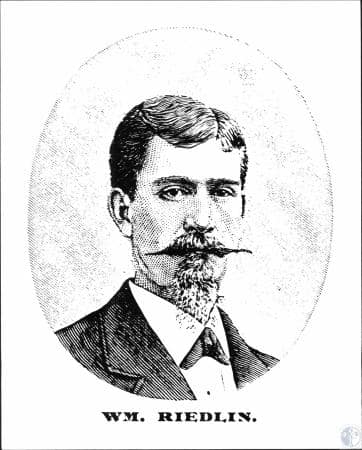 Owner of the Bavarian Brewery and promoter of German culture and tradition. Bavarian Brewery produced a number of different labels, including “Riedlin’s Select” beer.
William Riedlin Sr. was born on November 20, 1850 in Meullheim, Baden. He immigrated to the United States in 1870 and married Emma Hoffman in 1877 (she died in 1912). Emma Hoffman Riedlin was born in Riesenburg, Prussia. At the age of twelve, her family immigrated to the United States. The couple had five children: William Riedlin Jr., Walter Riedlin, Lucien Riedlin, Mary Riedlin Cobb and Mrs. William Schott.
In 1877, Riedlin opened a saloon and grocery in Cincinnati. One year later, he established Tivoli Hall, a saloon and beer garden, on Vine Street in Cincinnati. In 1882, Riedlin purchased the Bavarian Brewery in Covington. Under his guidance, the brewery grew in size and production. During the years of Prohibition, Riedlin converted his operation from beer production to soft drink production.
William Riedlin Sr. was very active in social and community groups. He was a member of the Board of Alderman in Covington. In addition, he was a member and president of the Covington German Pioneer Society, member and president of the Covington Turner Society, treasurer of the Baden Benevolent Society and a member of the Covington Elks. In business affairs, Riedlin was not only the owner of Bavarian Brewery, but also filled the following positions: President of the Covington Coal Company, director of the Covington German National Bank, director of the Covington Sawmill and he was a major stockholder in the Ludlow Lagoon Amusement Park.
William Riedlin Sr. suffered from acute asthma. In 1919, he traveled to Ashville, North Carolina in an attempt to recuperate. He died in that city in February 1919. Services were held at St. Paul Evangelical Protestant Church in Covington. Burial was at Highland Cemetery in Fort Mitchell. Riedlin was survived by his widow and three children. William Riedlin Jr. took over the operation of the soft drink plant at the time of his father’s death in February 1919. The younger Riedlin, however, died soon after on March 16, 1919. He was only 37 years old. William Riedlin Jr. was survived by his widow, Lena Riedlin. Burial was at Highland Cemetery in Fort Mitchell, Kentucky.
Kentucky Post, October 12, 1912, p. 2, October 15, 1912, p. 4; March 7, 1919, p. 1and 2, June 2, 1997, p. 4k; Kentucky Times-Star, May 31, 1935, p. 9; Cincinnati Enquirer, January 13, 1899, p. 6.
Print this page