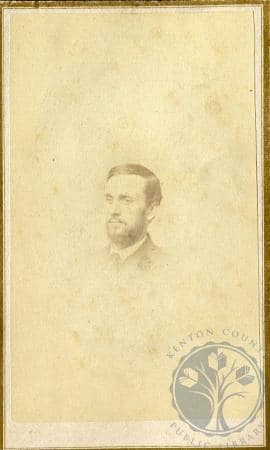 A noted attorney and Covington City Councilman. William H. Mackoy was born in Covington on November 20, 1839. His parents were John and Elizabeth G. Hardia Mackoy. He married Margaret Chamber Brent of Paris, Kentucky in 1868. Following his admission to the bar, Mackoy joined the law firm of Mackoy & Mackoy of Cincinnati. He was a founding member of the Kenton County Bar Association, the Kentucky State Bar Association and the Cincinnati Bar Association. William H. Mackoy served on the Covington City Council from 1882 to 1889. He was a member of the Law Committee of Council and helped produce the draft of the amendment that created the Covington Reservoir in Fort Thomas, Kentucky. William H. Mackoy died on September 14, 1923 in Lexington. He had moved to that city in 1920. He was survived by his widow and two children: Harry Mackoy and Mrs. Edmund Jillson. Funeral services were conducted at the home of Harry Mackoy by the Reverend Charles G. McGinley, Pastor of the First Presbyterian Church of Covington.