The first permanent city hall was constructed in Covington in 1843-44. The building was designed in the Classical Style and featured a main entry flanked by pilasters and surmounted by a pediment. This main entry was accessed by a grand flight of stairs. The central feature of the building was a tree tier tower. This tower rose from the center of the roofline and sported a handsome clock. At the pinnacle stood a statue of George Washington, which had been purchased with the donations of the citizenry. The building stood at the northeast corner of 3rd and Market Street (present day Court Street). The dedication ceremonies took place on June 24, 1844. City officials at the time included: Moses V. Grant, mayor; Alexander H. Jameson, clerk; George B. Marshall, city treasurer; John W. Menzies, city attorney; Greenberry F. Laney, marshal; Hamilton Martin, postmaster; and the following council members: James G. Arnold, James Adams, William W. Southgate, George M. Southgate, John S. Finley, John T. Levis, John Mackoy, John M. Bowen, Lewis Roach and Franklin Riggs.

Initially, the city hall was used only to house city offices. The county seat of Kenton County was located in the City of Independence. However, the population growth in the county was occurring in Covington. Covington residents were become frustrated with the long travel to Independence to conduct county business. A decision was made to establish a second county seat in Covington. These county offices were housed in the Covington City Hall.

The city–county building began showing its age in the years following the Civil War. In June 1872, the city council announced that the building would be completely remodeled. The tower on the building was removed and a third story was added. Essentially, the Classical Style structure was transformed into an Italianate Style Courthouse. The statue of George Washington was placed in the southeast corner of the courthouse lawn and stood there for over a decade. In 1884, this statue was badly damaged by a grounds crew. Eventually, the statue was removed.

By 1889, plans were underway to build a new courthouse to house both the city and county government. The original 1843-44 structure was demolished in May 1899 to make way for the new building. The new three-story courthouse was designed by the architectural firm of Dittoe & Wisenall. Decorations on the exterior of the brick structure included carved stone details and an elaborate main entrance. The interior decorations included mosaic tile floors, beautiful woodwork and stained glass. The new courthouse was officially dedicated on January 15, 1902. The cost of the structure was $210,000.

By the early 1960s, the 1899-1902 courthouse could no longer house the necessary government offices. Carl Bankemper was chosen to design a new city-county building. Bankemper designed a modern ten-story brick office tower. The tower was to be located o the site of the old Covington Federal Building at the southeast corner of Scott and 3rd Streets. The federal building was demolished in 1968 and work on the structure began. The new $3.5 million structure was ready for occupancy in the summer of 1970. The first, fourth, fifth and sixth floors housed county offices and the city offices were located on the second and third floors. The tenth floor housed a 125-bed jail facility. The building was designed with expansion space in mind (the seventh, eighth and ninth floors were unfinished). The 1899-1902 courthouse was demolished in 1970 to make way for a surface parking lot. 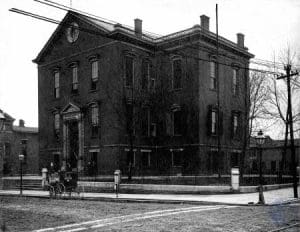 By the 1980s, the tenth story jail in the city-county building could no longer accommodate the inmate population. In 1984, the City of Covington announced plans to relocate. In 1985, Covington city offices were temporarily moved to the former J.C. Penny Building on Pike Street. In the meantime, city officials began looking for a permanent building. In March 1988, the old Coppins Department Store building at the northeast corner of Madison Avenue and 7th Street was purchased by the city for $1.5 million. The building was remodeled and in September 1990, officially became the Covington City Hall.

The 1968-1970 city-county building was occupied entirely by county offices beginning in 1985 (when the city left the building for the J.C. Penny location). The county transformed several additional floors in the building for jail use. In addition, an elevator shaft and portico were constructed on the west side of the building.