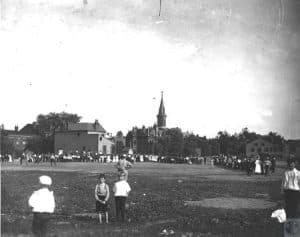 The City of Covington began seriously making plans for park facilities in 1906 with the creation of the Covington Park Board. City Engineer W.E. Gunn commented, “ Other cities have parks and find it profitable to maintain them. Covington certainly needs breathing spaces on account of being so compactly built …” That year, the city turned over a block of Sixth Street between Johnson and Main for park purposes. The first board members were: F.F. Woodall, Reverend Ferdinand Brossart, Dr. Charles Pieck, Charles R. Houston, J.A. Johnston and Ulie J. Howard. The board immediately began improving the property with flowers and shrubs. In 1907, another block on Eleventh Street between Scott and Greenup was turned over to the board.

The Sixth Street Park did provide some open space for the people of the west end, however, it was very small and ill equipped. In 1908, the Covington Park Board began discussing the acquisition of a large piece of property for park purposes. Three parcels ere considered, including: The Levassor property in the southern section of the city (48 acres), a 50 acre parcel west of Buena Vista Hill, and the Goebel property at 5th and Philadelphia Streets in the west end (14 acres).

In August 1908, the members of the park board submitted their proposal to the city council. They recommended the purchase of the Goebel property in the west end. This site was recommended because of its reasonable cost and location. Park board members felt that the park should be located as near as possible to the old town, the area where the poor and working classes lived. In May 1909, the City of Covington purchased the Goebel property for $25,000. At that time an announcement was made that the land would be converted into a park and be named for William Goebel. Goebel was a resident of Covington and a lawyer. In 1900, Goebel had been elected governor of Kentucky under a cloud of suspicion. On the day of his inauguration, however, he was assassinated.

The actual construction of the new Goebel Park was delayed until March 1910. Engineer Willard L. Glazier laid out the park, including a playground, gravel walking paths and a small comfort station. In the year 1913, the park was further enhanced by the construction of a shelter house facing Philadelphia Street. The structure measured 51 x 88’ and was surrounded by a wide veranda. The shelter house contained boys and girls’ restrooms, a large play space, locker rooms, drinking fountains and two maypoles. For a number of years, the students of nearby Third District School used the shelter house as a gymnasium during the school year. The year 1913 was also marked by the construction of a new playground at Goebel Park.

In 1916, plans were underway to build wadding pools, one for girls and one for boys, near the shelter house. The cost of the project was expected to reach $600.00. The pools were ready for use in 1917. Baseball and football fields were also constructed in the Willow Run area near the park. These fields were very popular recreation areas.
The construction of Interstate 75 in the late 1950s destroyed most of the ball fields along Willow Run. By this time, Goebel Park was going into decline. Much of this decline was due to almost constant vandalism of park property.

The creation of Main Strasse Village in the 1970s brought new life to Goebel Park. The old shelter house was removed and replaced by a new one in 1975. Also, the Carroll Bell Chimes Tower was constructed on Philadelphia Street at the foot of 6th. At about this time, additional property along Philadelphia Street was added to the park. On this new property, an Olympic size swimming pool, basketball and tennis courts and a new parking lot were constructed.

Today, the park continues to serve the people of the west end and beyond.