Fourth District School was established in 1852 to serve the growing population of the City of Covington. Initially, the school was located in two separate locations. One building was located on Madison Avenue between 9th and 10th Streets and another building was located in the Patton’s Subdivision (Austinburg). These schools had three teachers between them. Fourth District remained at this location until 1868 when a new 12-room brick schoolhouse was constructed on Scott Blvd. between 15th and 16th Streets.

In 1894, the Fourth District School building was badly damaged by a fire. A fire broke out in the L.L. Wilke Livery Stable adjacent to the school. The stable was destroyed and 14 horses were lost in the blaze. Fourth Street School suffered fire and water damage. School officials immediately set aside funds for repairs. The cost of refurbishing the building and new furniture amounted to $8,000. While the work was being completed, students attended classes in the Burnet Street Mission House near 17th Street, a building at 1548 Garrard St. and the Zwick Building at 11th and Scott Streets.

Enrollment at Fourth District School varied widely. In 1878, 794 pupils were being educated at the school by 13 teachers. This resulted in a teacher-student ratio of 1-61. By 1895, Enrollment had grown to 843. The number of pupils attended Fourth District peaked in the early 1900s. IN 1907, 1,010 pupils were enrolled.

During the 1930s, the Covington School Board replaced a number of their aging buildings with new structures. In 1939, the old Fourth District School was demolished and a new building constructed on the same site. Funding for the project was provided by the Covington taxpayers and the Works Progress Administration (WPA). 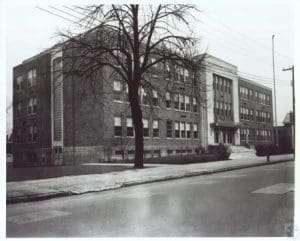 The Covington School Board re-organized the system in 2001. At that time, a decision was made to reopen Fourth District School as a traditional neighborhood elementary facility. The students of the newly recreated school were given the opportunity to name the facility. The name chosen was Thomas Edison Elementary. The board approved the change in August 2001.