On May 1, 1847, a group of German Protestants living in Covington’s west end met in order to organize a new congregation. This group of thirty families immediately decided to purchase a lot at the northeast corner of Banklick and 11th Streets and to build a small frame structure. The first services were conducted on August 29, 1847 and the building was solemnly dedicated on November 1 of the same year.

St. Paul Evangelical Church grew quickly. In 1860, work began on the construction of a new brick church on the original lot. In 1867, the second story of this building was completed. The second level was used as an auditorium and the first level was used for classroom and office space. The new church was dedicated on April 28, 1868.

In 1872, the congregation celebrated its 25th anniversary. To celebrate the occasion, a new altar, pulpit and chandeliers were purchased. Also, stained-glass windows were installed in the auditorium. A bell tower and bell were added to the church in 1875. The bell was named Abraham Lincoln in memory of the country’s fallen president. Also at this time, a $1,075 clock was purchased and installed in the tower.

Although Saint Paul Evangelical was a Protestant congregation, it often was at times out of step with the other mainline denominations of the city. For instance, in 1909, the congregation was one of only two Protestant churches in Kenton County that did not participate in the anti-saloon drive. The pastor of St. Paul, C.E. Gilbert Schmidt, wrote to the drive organizers, “Your action is the source of the worst hypocrisy the world has ever seen, making the church a greater evil than the saloon.” German culture, like social beer consumption, set members of St. Paul congregation apart from other Protestant groups.

Until 1912, all services at St. Paul Evangelical were conducted in the German language. At this time, however, the congregation voted to hold English and German services on alternate Sundays. The use of the German language came to a complete halt during the First World War. Anti-German hysteria spread throughout Northern Kentucky and the members of the congregation decided that it was more important to show their patriotism than to maintain services in German.

The pipe organ was moved from the gallery to a position behind the altar in 1919. Other improvements included an addition to the building which housed Sunday school rooms, a pastor’s study and infant room and bathroom facilities. Members celebrated the 75th anniversary of the founding of the congregation in 1922. At this time, membership stood at 350.

The 1920s and 1930s witnessed several improvements to the church facilities. In 1923 a new parsonage was purchased at 1521 Holman Street. In 1932, the old tower and steeple of the church were removed. A new brick tower and cooper steeple were built in its place. The steeple was crowned by a copper hand with its finger pointing to heaven.
In 1957, St. Paul became affiliated with the United Church of Christ. At this time, the name of the congregation was changed to St. Paul United Church of Christ. Urban flight during this era greatly impacted the congregation. As the population of Covington declined, so did membership at St. Paul. The neighborhood around the church was becoming a less desirable residential area. In addition, the age of the church building was resulting in high maintenance costs. 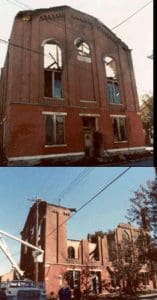 In 1957, the congregation voted to establish a building fund. Within a few years, enough money had been collected to purchased a 7.2-acre plot of ground on Ft. Henry Drive in the suburban community of Lookout Heights (Ft. Wright). The congregation hired architect William F. Brown of Newport to design the new structure in 1966. Ground was broken on May 21, 1967 and the new church was dedicated on February 9, 1969.
The completion of the new church in Fort Wright, resulted in the sale of the old building at Banklick and 11th Streets in Covington in 1971 to the All Nation Temple. The new congregation intended to restore the building for use as a church, but funds were not available. The building was used as a storage facility by the church for the next two decades. On Saturday September 22, 1990, the old St. Paul Church was destroyed by a suspicious fire. The flames consumed the tower and steeple and caused an entire wall to collapse on a neighboring building. The remainder of the building was quickly demolished.