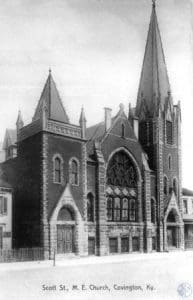 A Methodist society was established in Covington in 1827 with 10 members. By 1832, the number had grown to 195. That year, the Methodists financed the construction of a church at 233-235 Garrard Street. This original building was quickly replaced by a larger structure in 1843. This building was located on the east side of Scott Street between 5th and 6th Street. The congregation was named Scott Street Methodist Episcopal Church. The energetic congregation raised funds to construct a façade to the 1843 building. This work amounted to $8,000 and was raised in a two-day period.

The members of the Scott Street Church decided to construct a larger building in 1895. The congregation hired the Cincinnati architectural firm of Crapsey and Brown to design a new edifice. The cornerstone of the new building was set into place on June 30, 1895. The dedication ceremonies occurred in May 1896. The new Scott Street Methodist Episcopal Church was a Victorian Gothic Style structure with a façade featuring corner bell towers surmounted by spires. Each tower contained a entryway into the building. The central portion of the façade contained a large stained glass window. The building measured 110’ in length and 68 ½’ in width and had a seating capacity of 1,200.
Tragedy struck the congregation in January 1904. A fire with its origins in the basement of the church quickly spread. To make matters worse, the extremely cold temperatures resulted in several water mains freezing. By the time the fire was extinguished, much damage had been done to the building. Several of the memorial stained glass windows and the pipe organ were completely destroyed. A restoration of the building was quickly undertaken.