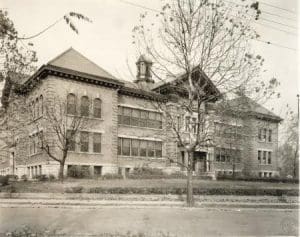 Covington’s population growth resulted in overcrowding in many of the public schools by the turn of the century. During the early 1900’s, over 800 pupils were attending classes in rented quarters. These facilities were not designed for school use and lacked many modern conveniences. By 1908, the Covington Public School Board was paying $2,400 in rent each year to provide the needed space to educate the district’s pupils.

Plans for a new district school building in Covington began to take shape in 1907. Architect Lyman Walker was given the commission to design a modern schoolhouse to serve the children living in the Austinburg neighborhood. A location was selected at the corner of 19th Street and Maryland Avenue. The cornerstone of the new building was set in place on October 18, 1907. The festivities included a parade of school children from the city hall to the new school site. The parade was led by a local brass band.

At first, the construction of the new building proceeded without concern. However, in September 1908, the construction work was stopped due to the lack of funds. The Covington School District was operating under a deficit and was forced to borrow money just to pay the teachers’ salaries. By this time, the brickwork on the exterior of the building had been nearly completed and the structure was under roof. The interior of the building, however, stood unfinished. In the annual report of Superintendent Homer Sluss, he urged the passage of a bond issue to complete the new schoolhouse.

A bond issue for $75,000 was placed on the ballot in November 1908. The issue passed. These new funds allowed the work on the new school to continue in January 1909. The new $100,000 school was ready for occupancy in the summer of 1909. The building was christened the Sixth District School. The new building was described as “modern” and as “one of the finest schools in Kentucky.” The only drawback to the new building was the condition of 19th Street and Maryland Avenue.In 1909, these two streets were unpaved. The Kentucky Post called for the city to pave the two streets so the children to easily travel to and from the building during bad weather. Enrollment at Sixth District School stood at 595 in 1910 and at 648 in 1916.

Three classrooms were added to the Sixth District School building during the Great Depression using Works Progress Administration funds (WPA). This work was completed in 1939 and greatly contributed to the efficiency of the school.

In 1981, the Sixth District School building underwent a complete renovation. Improvements included a sprinkler system, new exits, a remodeled cafeteria and library and carpeting in the classrooms. The architect for the project was Bill Batson. The total cost of the improvements reached $900,000, nine times the sum of the original construction. The newly remodeled structure was rededicated on December 13, 1981.

A major addition was constructed at Sixth District School in 1999-2000. The addition included a new wing housing a cafeteria, six classrooms, a family resource center and a PTA meeting room. At the same time, the classrooms in the older areas of the building were completely refurbished. This new addition was officially dedicated on October 17, 2000.

The desire to build a modern and safe playground in the Austinburg neighborhood led a group of concerned residents and school officials to establish the Maryland Millennium Playground Project in 2001. Plans called for the construction of the playground on the Sixth District School grounds. Much of the work on the playground was contributed by hundreds of area residents and business people. Materials were also donated by members of the community. Over $75,000 of the $100,000 needed for the project had been raised by the time the playground was dedicated on Saturday June 2, 2001.