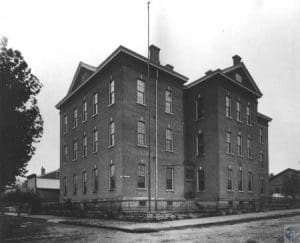 On April 10, 1850, the Covington City Council officially authorized the establishment of the Third District School. At this time, the city’s First District and Second Districts Schools were overcrowded. A three-story structure was built at the southeastern corner of Philadelphia and 5th Street in Covington’s west end. Enrollment in 1851 was 96.

The growth in population of the west end resulted in steadily increasing enrollment at Third District. The original building did not age gracefully. Already in 1869, school board members were having difficulty with the walls of the structure. The condition became so serious that some parents were removing their children from the school. At this time, repair work was done to stabilize the building.

In 1877, a special committee was appointed to inspect the school. Their findings indicated an inadequate foundation and warped walls. The committee members recommended the demolition of the building and the construction of a new schoolhouse. In the meantime, the students were forced to vacate the old building. Five grades were housed in temporary quarters in a building at the corner of 4th and Madison. An additional class was housed at a Protestant church on Bullock Street.

In September 1877, plans for a new Third District were accepted. The plans called for a three-story brick building. A stair hall with four entrances was located in the center of the building. In the following month, the bids for construction, totaling $22,675 were accepted and constructed work began. The new building was the pride of the west end. In 1880, 667 pupils were being taught by 13 teachers at Third District.

During these early years, the school benefited greatly by the presence of many dedicated and talented teachers. In 1929, one of these teachers retired after 53 years of service to Third District. Her name was Miss Elizabeth Sowden. She was given a pension by the school board in recognition of her many years of service. 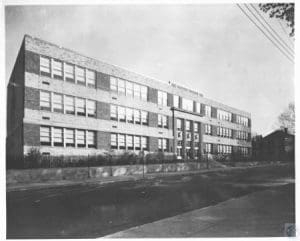 Third District School building was showing its age by the 1930s. The Great Depression, however, delayed construction of a new building. In 1939, work on a new building was begun (on the site of the previous building). Funding was provided by local tax dollars and the Works Progress Administration. The new Third District School was open to the public for inspection in January 1940.

Urban flight during the post-World War II era, resulted in dramatic declines in population in Covington. The enrollment of the Covington Public Schools also began to decline. In addition, the construction of Interstate 75 in the late 1950s resulted in the construction of an exit ramp onto 5th Street near Third District. In 1981, the decision was made to close Third District School. Eventually, the building was purchased and converted into an office building, which was called the Fifth Street Center.