The Baptist populations residing in the western states in the 1830s and 1840s were hampered by a lack of well-trained ministers to spread the faith. In 1833, the western Baptists gathered at Cincinnati for a convention. At this meeting, discussions turned toward the establishment of a seminary to train future ministers. The delegates approved the idea and a committee was formed to work out the details.

The committee spent much of the winter of 1834 and 1835 scouting the Cincinnati area for suitable land. At this time, Cincinnati was centrally located in the western states and offered good transportation facilities. The committee eventually decided on a site just south of the City of Covington, Kentucky. The Covington site had several advantages. The site was located near Cincinnati but was located in Kentucky. In this way, the committee felt that the institution would have the support of the Kentucky and other southern Baptists. In addition, the property was cheaper that property on the northern side of the Ohio River. In 1835, the committee purchased nearly 350 acres of ground (This property had originally been part of the Riddle Farm, the Kyle farm and the Richard Southgate Farm). 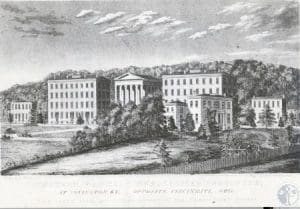 The purchase of property, however, did not result in the immediate opening of a seminary. In 1840, the Baptists received a charter from the Commonwealth of Kentucky to establish the institute. The charter also called for a board of directors which consisted of the following: Henry Wingate and Cave Johnson of Kentucky; Ephraim Robins, S.W. Lynd, John Stevens and Thatcher Lewis of Ohio and J.L. Holman of Indiana.

The board of trustees chose 12 acres on the highest point of the property for the campus of the institute. This property was roughly bounded by Madison, Russell, 11th and Robbins Streets. The plan was to eventually sell the remainder of the property and to use these profits to build permanent buildings and to establish endowments for professor salaries. Between 1839 and 1841 over 23 acres of property were sold at auction. These sales amounted to $29,000. By 1843, over 150 buildings had been built in the neighborhood. The trustees also approved the construction of a 22-acre cemetery on the institute’s property. This cemetery evolved into Linden Grove Cemetery.

There were three buildings that constituted the Western Baptist Theological Institute. The largest structure was the classroom and dormitory building. This building stood four stories tall, was 120’ long and 46’ wide. The first floor contained classrooms and a chapel. The top three floors contained dormitory rooms for the students. The cornerstone of the building was set into place on August 3, 1840. The trustees spent $20,000 to construct this building. These funds were acquired by the sale of lots to the public. The two other buildings used by the institute were already on the site when the property was purchased. One of these homes belonged to Alfred Sanford (son of General James Sanford). Following the purchase, the Sanford home was remodeled for use as a president’s residence (this house still stands at 1026 Russell). The other home was remodeled for use as a faculty residence.

The completion of the main building, however, did not result in the opening of classes. The trustees took things slow and continued to raise money by selling plots of ground. By 1842, nearly 100 homes had been built in the neighborhood with many lots still available.

Finally, in September 1845, the first classes at the Western Baptist Theological Institute were officially inaugurated. The institute offered a two-year program in Theology and a classical program for those who were not yet ready for college level work. The Theology program offered classes in Biblical criticism and interpretation, Ecclesiastical history, pastoral Theology and church organization and homiletics and pulpit eloquence. During the first three years of the institute’s existence, enrollment averaged about fifty, with eleven of these being Theology students. Most of these students were from northern states.

The first president of the institute was the Reverend R.E. Patterson of Boston. Prior his employment in Covington, Patterson was a tutor at Columbia College in Washington D.C. and a professor of mathematics at Waterville College in Maine. Patterson had also worked as a pastor in Salem, Massachusetts and Providence, Rhode Island. Other faculty members were Ebenezer Dodge and Asa Drury. Asa Drury became responsible for the operation of the classical program. This program accepted students regardless of whether they intended to study for the ministry. The program was designed to prepare young men for college work.

Despite an excellent start, the Western Baptist Theological Institute proved very fragile. The institute was established to serve western Baptist, both those from the north and the south. The issue of slavery, however, divided the western Baptists from the very founding. Reverend Patterson, the institute’s president, also served on the National Board of Foreign Missions. This board published a number of articles indicating that slavery should not be tolerated in the Baptist faith. This association between Patterson and abolitionism caused much concern among the institutes southern trustees and students. On May 8, 1845, Baptists delegates from the southern states met in Augusta, Georgia and formally established the Southern Baptist Convention. This split would have grave consequences for the Western Baptist Theological Institute.

Several southern members of the board of trustees asked Dr. Patterson to publicly state his opinions on abolitionism. He refused to do so. Instead, Patterson left Covington and was replaced by Dr. S.W. Lynd. In 1848, a southern member of the board introduced a resolution that spoke of slavery as divinely inspired. The resolution was defeated. The four southern board members who voted for the resolution were undaunted. These members, without consent of the rest of the board, lobbied for the passage of a bill at the Kentucky General Assembly in Frankfort. The bill called for the appointment of 16 new members to the Board of the Western Baptist Theological Institute. In addition, all future trustees were required to be Kentucky citizens. The bill became law.

The northern members of the board were stunned by this obvious attempt to take control of the institute. They were particularly angry, because most of the funds that had donated to the institute were donated by northerners and because most of the students were from the north. The northern members of the board fought to strike down the new law. Eventually, the Kenton Court of Appeals declared the law null and void.
The abolitionist controversy and the split between factions on the board took its toll on the institute. Donations plummeted along with the student enrollment. In 1855, the board decided to close the Western Baptist Theological Institute. Both factions agreed to a sale of all the property, with the proceeds being divided equally.

In August 1855, the Main building of the institute was sold to W. Scott. Mr. Scott operated a small female college and preparatory school in the building for several years. During the Civil War, the hospital was utilized as a convalescent hospital for wounded Union soldiers. In 1867, the building was purchased by the Sisters of the Poor of St. Francis. The sisters relocated their St. Elizabeth Hospital to the site. St. Elizabeth Hospital occupied the building until 1914 when the current hospital was completed. In 1916, the main building of the Western Baptist Theological Institute was razed and Wadsworth Electric Company was built on the site.