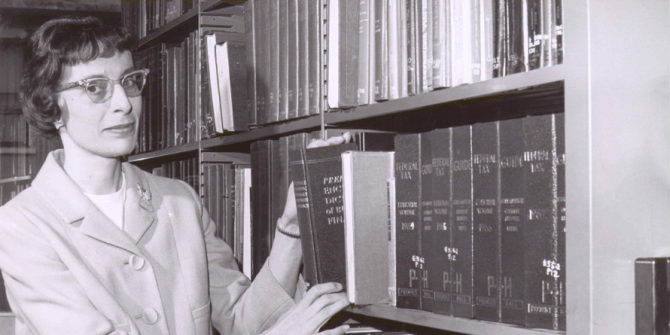 Miss Mongan had served the Library for more than 40 years, starting when the Covington Library was in the Carnegie building. During her tenure as director, bookmobile service was introduced to the county, the Kenton County Public Library District was established in 1967, a new Covington library was built, the first Erlanger Branch designed specifically as a library was opened in 1978, searching for books moved from a paper card catalog to an online system and the Independence Branch was established in 1995.

In 1958, Rebecca Cox, director of the Covington Library, retired after 18 years of service as head librarian. Miss Mary Ann Mongan, a graduate of the University of Kentucky and former librarian for the city of Newport, was hired to replace Miss Cox. Miss Mongan lived in Cincinnati. There was quite an outcry from Covington area residents that an “outsider” was hired for Covington. Little did they know that Miss Mongan would direct the Library for the next 40 years and lead it to the highly ranked system it is today.

Under Miss Mongan’s tenure, the Library system grew from two individual libraries and a bookmobile to a county funded system that includes three large library branches and a full range of outreach services that meet the needs of nearly one million visitors annually.

Executive Director Dave Schroeder stated, “She more than any one person in the history of our Library is responsible for the success of our system. She laid the foundation on which we stand. There are few people who leave a legacy that will carry on for centuries but Miss Mongan is one of those people.”

In the summer of 1999, Library Director Mary Ann Mongan announced her retirement. Miss Mongan had served the Library for more than 40 years, starting when the Covington Library was in the Carnegie building.  Miss Mongan was credited for her dedication to library service and for the growth and success of the Kenton County Public Library system. On the day she retired, the staff, Board and Friends celebrated her tenure with the Library by creating scrapbooks, producing a video tour of the Library and showering her with gifts. She was also recognized by representatives from the State of Kentucky, Kenton County, the Kentucky Department for Libraries and Archives and the City of Covington, which presented her with a key to the city and proclaimed the day “Miss Mongan Day.” She also received a note of congratulations on her retirement from President Bill Clinton. Miss Mongan was truly the backbone of the Library in second half of the 20th century. During the renovation of the Covington Library in 2015, the Library Board of Trustees renamed the Covington branch library to the Mary Ann Mongan Library.

In 2009, the Kenton County Public Library Foundation created a literacy award in her honor. This award recognizes an individual or organization that makes an impact of the lives of those in Northern Kentucky with their passion for promoting literacy efforts in others. The Mary Ann Mongan Literacy Award was presented last week to Sister Mary Ellen S.N.D. from Prince of Peace School in Covington, Kentucky.