We are requesting photos to add to our historical photograph database Faces and Places.
We are looking for your a copy of your oldest family photograph!
Donate Photos Donate Photos
Nov 2021

A collection of military items donated by Purple Heart recipient Woodrow W. “Woody” Booth’s will be on display in the Local History Department of the Kenton County Public Library’s Covington Branch just in time for Veteran’s Day. Mr. Booth, of Villa Hills, Kentucky, passed away earlier this year at the age of 99. Per his wishes, some of Woody’s personal and military items were gifted to the Kenton County Public Library for preservation and display.

From 1942 to 1946, Mr. Booth served in the 81st Infantry Division of the United States Army. He was a Squad Leader in the South Pacific during World War II. He participated in several battles. Mr. Booth earned his Purple Heart when he was severely injured during the Battle of Peleliu. 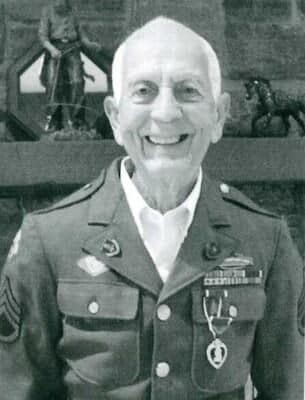 The items were donated to the library by Mr. Booth’s friend and neighbor Mary Hemmer.

“Woody was very intelligent, possessed an excellent memory. He loved to talk and share stories.  I suppose this may have come from his childhood days working in his father’s country store in Beattyville, Kentucky.  Reading about history and sharing that knowledge was another passion, which of course included his personal history in the military during WWII.  Woody leaving his uniform, medals and military memorabilia to the library feels like a continuation of his voice,” said Ms. Hemmer. “There is so much more to tell about Woody, a soldier who got the dreaded ‘Dear John letter’, coming home and finding his true love, his long career at Ford Motor, his commitment to the Masonic temple, church, community, his new life after Elsie’s death – his new chosen family of neighbors. There is so much to be said about this huge life of 99 years = packed into the frame of a six-foot man of 120 pounds. A simple magnificent man.”

Elaine Kuhn, the library’s Local History & Genealogy Department supervising librarian describes what will now happen with the donated items.  “Mr. Booth’s uniform, Purple Heart, token from his honor flight, shrapnel from his injury tell the story of his bravery,” stated Ms. Kuhn. “We are so honored to be given this donation that will allow us to tell his, and the hundreds of other veterans in our region, stories for generations to come.”

Among the items donated also include portraits of him, photos from his youth, lots of clippings related to his service. These items will be on display at the library, located at 502 Scott Boulevard in Covington, throughout November. The Local History & Genealogy Department hours are Monday through Wednesday, 9 am to 5 pm, Thursday 9 am to 9 pm, Friday 9 am to 5 pm, Saturday 10 am to 5 pm, and Sunday 1 pm to 5 pm.

Library staff are also looking for photos of veterans. “During the month of November, we are asking people in the Northern Kentucky to contact us so that we can scan photos and add then to our online historical photo database Faces and Places. Faces and Places features the people, places and activities that make this such a great area,” said Kuhn. Find Faces and Places at kentonlibrary.org/facesandplaces.

Both print and digital photograph donations are accepted. Call the Local History and Genealogy Department at (859) 962-4070 and set up an appointment to donate your photos or to have them scanned and returned to you. Or send an email to kate.mckenzie@kentonlibrary.org to coordinate a donation or to ask questions.

We welcome your respectful and on-topic comments and questions in this limited public forum. To find out more, please see Appropriate Use When Posting Content. Community-contributed content represents the views of the user, not those of Kenton County Public Library