Covington Catholic High School was established in 1925, however, its roots can be traced back to 1885. In that year, the Brothers of Mary of Dayton, took charge of the boys’ school and opened a commercial high school for boys at St. Joseph Parish at 12th and Greenup Streets. The commercial high school offered a two-year curriculum and was named St. Joseph High School.

By the 1920s, the need for a four-year academic high school for young men in Covington was apparent. Bishop Francis W. Howard approached the Brothers of Mary at St. Joseph and asked them to open such a school. The Brothers agreed to do so, but lacked a suitable facility. Monsignor Henry Tappert of Mother of God Parish offered space in his elementary school of 6th Street. In September 1925, the new Covington Catholic High School opened with 32-freshman in the Mother of God School building. The first principal was Brother Anthony Weber S.M. (Society of Mary).

In 1926, the Brothers of Mary closed St. Joseph Commercial High School to focus their attention on Covington Catholic. By 1929, Covington Catholic maintained an enrollment of over 100 in the freshman through senior classes. Enrollment had to be capped at 35 students per grade do to limited amount of classroom space. The year 1929 also witnessed the schools accreditation by the Commonwealth of Kentucky and the Southern Associations of Colleges and Secondary Schools.

Covington Catholic High School was hampered from the beginning by a lack of space. In 1935, the pastors of the Kenton County parishes proposed to Bishop Howard that the entire Mother of God School building be purchased for $75,000 and turned over to CCH. Under this proposal, the elementary students of Mother of God Parish would attend nearby Notre Dame Academy. This plan, however, was never carried through due to the lack of financial resources. The Great Depression was having an enormous impact on the economy and school officials did not think they could raise the necessary funds.

The baby boom of the post World War II era made the construction of a new school building necessary. A 14-acre parcel of land was acquired at 1600 Dixie Highway in the suburban community of Park Hills as a site for a new building. Plans called for a three-story building with basement and gymnasium consisting of 44,000 square feet. The cost of the building and the site reached the sum of $845,49.44. The cost was split evenly among the sponsoring parishes: In Covington: Cathedral, Holy Cross, Mother of God, St. Aloysius, St. Ann. St. Augustine, St. Benedict, St. John and St. Joseph; the two Ludlow Parishes of St. Boniface and St. James; St. Agnes in Fort Wright and Blessed Sacrament in Fort Mitchell. The class of 1955 was the first to graduate from the new campus.

Covington Catholic flourished at the new location. Enrollment skyrocketed throughout the 1950s and 1960s. New buildings were constructed on the campus including a three-story residence for the Brothers of Mary, Wooten Field and the Scott Knochelmann Athletic Building (1988).

The 1955 building served the CCH community for nearly five decades. In the year 2001, school officials began planning for the construction of a new academic building on the Park Hills site. A successful capital campaign was conducted in 2002 and permission was received from Bishop Roger Foys to begin construction. Plans called for the demolition of the brothers’ residence and the construction of the new building behind the 1955 structure. When the new building was completed, the old academic building was demolished. The new Covington Catholic High School was dedicated on December 7, 2003 by Bishop Roger Foys. 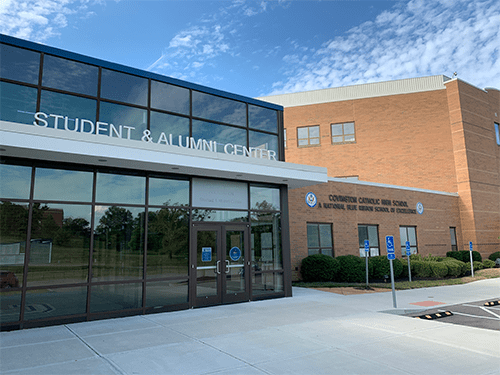