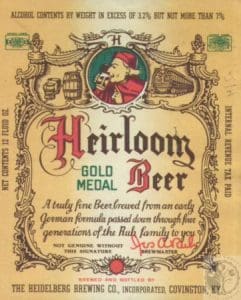 Heidelburg Brewery was established in 1934 with George H. Meyerratken as president and Joseph Ruh and Vice President in charge of production. Ruh had been the long-time brew master at Covington’s Bavarian Brewery. A new building was constructed at the corner of 4th and Bakewell Streets and the company was incorporated with stock valuing $350,000.

The brewery opened in 1935. Among its most popular products was the Student Prince Brand. The name was derived from an operetta about a German prince who attended the University of Heidelburg. In 1940, the brewery’s premium brand, Heirloom, won a gold medal at the French Grand Prix Contest for beer.

Initially, the brewery proved a great success. However, several factors were working against it. The plant was not constructed near the main railroad lines in Covington. This meant that all materials and finished goods had to be brought back and forth from the rail yards to the plant. This situation increased the overall cost of the product. Another set back was the rationing of grain during World War II. This resulted in a decrease in overall production. The 1937 flood also contributed to a loss of revenue. Water reached the plant and did considerable damage to the large metal storage tanks. In addition, the water also reached the grain storage silo. As a result, all the grain was destroyed. The flood shut the plant down for four months.

In 1947, Joseph Ruh left Heidelburg Brewery. Thomas F. Bahr was named the new brew master. This new infusion of talent, however, could not turn the tide of decline. In January 1949, the stockholders of Heidelburg agreed to sell the company and the plant to Bavarian Brewery. Bavarian used the plant as a distribution center until 1955, when the plant was sold to the C. Rice Packing Company.