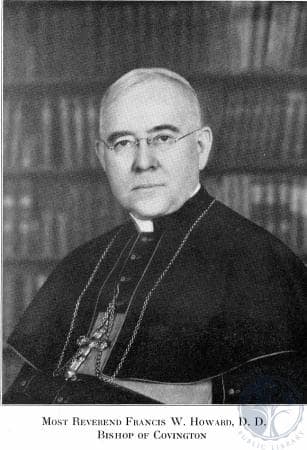 The Fifth Bishop of the Diocese of Covington. Francis W. Howard was born on June 21, 1867 in Columbus, Ohio. He studied for the priesthood at Mount St. Mary Seminary of the West in Cincinnati, Ohio. And was ordained by Bishop John Watterson on June 16, 1891 at St. Joseph Cathedral in Columbus. In 1901, Father Howard organized the first Columbus Diocesan School Board. In the following year, he participated in the establishment of the National Catholic Education Association (NCEA). For the next 42 years, Father Howard held offices in the NCEA including: Secretary General 1903-1928, President 1928-1936 and as a member of the Advisory Board from 1936 through 1944. On March 26, 1944, Father Howard was appointed Bishop of Covington to replace the ill Bishop Ferdinand Brossart. The consecration took place on July 15, 1923 at St. Mary Cathedral in Covington. The consecrating bishop was Archbishop Henry Moeller of Cincinnati. During his years in Covington, Bishop Howard worked enthusiastically to improve and expand the Catholic school system of the diocese. He oversaw the establishment of Covington Catholic High School, Covington Latin High School, Lexington Latin High School and Newport Catholic High School. Bishop Howard also made Villa Madonna College (now Thomas More College) a diocesan institution. Bishop Howard died on January 18, 1944. He was buried at St. Mary Cemetery in Fort Mitchell, Kentucky. Archives of the Diocese of Covington.