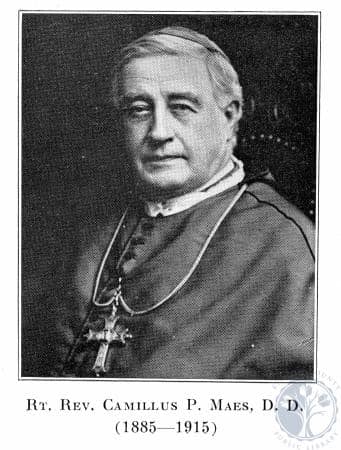 The third Bishop of the Diocese of Covington. A native of Coutrai, West Flanders, Belgium, Camilius P. Maes was born on March 13, 1846. While studying in a Belgian Seminary, Maes decided to dedicate himself to the American missions. He was ordained on December 19, 1868 in Belgium. Father Maes was sent to the United States following ordination. He arrived in this country on May 9, 1869 and began working in the Diocese of Detroit. While serving in Detroit, Father Maes wrote a biography of the Reverend Charles Nerinckx, a pioneer priest of Kentucky and co-founder of the Sisters of Loretto at the Foot of the Cross in Marion County, Kentucky. In 1880, Father Maes was appointed Chancellor of the Detroit Diocese. Maes was officially appointed Bishop of Covington on October 1, 1884, the first diocesan priest to in Detroit to be elevated to that rank. Archbishop William Elder of Cincinnati presided over the consecration on January 25, 1885 at St. Mary Cathedral in Covington. During his long tenure in Covington, Bishop Maes was responsible for expanding the Church in the Appalachian Region of the diocese, erecting the Cathedral basilica of the Assumption and establishing the Sisters of Divine Providence in the diocese. Bishop Maes died on May 11, 1915. His earthly remains were laid to rest at St. Mary Cemetery in Fort Mitchell, Kentucky. Diocese of Covington Archives.