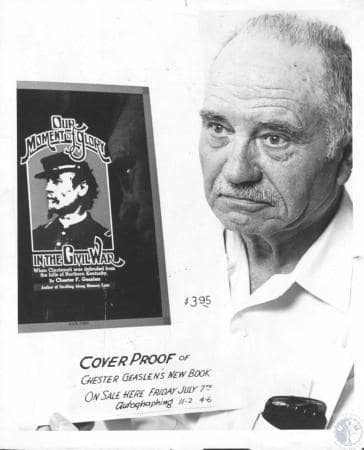 Chester Francis Geaslen was born on February 21, 1896 in Cincinnati. His father, J.F. Geaslen, worked for the Stewart Iron Works in Covington. In 1902, the family moved to the south side of the river. During his early years, Geaslen was an accomplished athlete. He played semi-pro baseball in the Bluegrass League. His athletic career, however, was interrupted by the First World War. During the war, Geaslen served with the marines. He entered the service on June 8, 1917. He fought in the Battles of Verdun and Toulon. He was wounded on April 6, 1918. He reached the rank of corporal by the time of his discharge on June 5, 1919. Upon his return from the war, Geaslen began attending St. Xavier College in Cincinnati. In 1922, he found work with the Louisville & Nashville Railroad. While working for the railroad, he married Lucille Huber in 1928.

The Great Depression brought his work at the railroad to a close. At that time he began working for the Kentucky Post as a circulation manager. During the Second World War, the need for experienced railroaders was great. Geaslen found work as an engineer. He retired from the railroad in 1966. During those years, Geaslen wrote a column for the Kentucky Post and later the Kentucky-Times Star called “Strolling Along Memory Lane.” The columns focused on Northern Kentucky history. Eventually, the columns were sold in book form (Volume I was published in 1972, Vol. III in 1974). Geaslen also wrote a book about Northern Kentucky’s role in the Civil War entitled, Our Moment of Glory in the Civil War (1972). He was a member of the Kentucky Historical Society and the Christopher Gist Historical Society | Chester Francis Geaslen died on January 5, 1986 at Madonna Manor Nursing Home in Villa Hills. Geaslen was survived by his widow and four children: Sue Ann Geaslen Ruschell, Peggy Geaslen Kohl, Mary Kathleen Geaslen and John W. Geaslen. Mass of Christian Burial was held at Madonna Manor Nursing Home with burial at St. Mary Cemetery in Fort Mitchell, Kentucky.