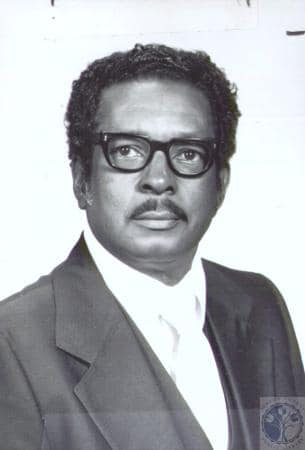 James Simpson was born on July 24, 1928 in Somerset, Kentucky. Following his education in the public schools, Simpson joined the United States Army in 1947. He took advantage of GI Bill funds to finance his education at the Cincinnati College of Mortuary Science. He graduated with a degree in 1951. In 1952, he began working at the African American C.E. Jones Funeral Home in Covington, which was located at 633 Scott Street. In May, 1961, Anna Jones, the owner of the funeral home retired. At this time, James Simpson took over the operation of the C.E. Jones Funeral Home, the name of which was changed to Jones & Simpson Funeral Home.

In 1972, the City of Covington acquired the original funeral home site for additional parking. A new location was found at 1129 Garrard Street. In 1971, James Simpson ran successfully for Covington City Commission. He was the first African American to win a city commission election in the history of Covington. Simpson served the full two-year term. He later finished an un-expired term on the commission in 1991. Simpson was also active in many other civic groups. He served on the following boards: Kenton County Airport Board (8 years – in 1978 he was elected Chairman), People’s Liberty Bank Board of Directors, Booth Hospital in Covington, St. Elizabeth Hospital in Covington and the Kenton County TB Sanatorium. Simpson was also one of the founders of the Northern Kentucky Community Center in the Eastside Neighborhood of Covington. James Simpson Jr. died on February 18, 1999. He was survived by his widow, Zona Simpson, and four children: James Simpson III, Ronald Simpson, Adrienne Simpson, and Arnold Simpson, a former City Manager of Covington and State Representative. Funeral services were held at the First Baptist Church on 9th Street in Covington with burial at Highland Cemetery in Fort Mitchell, Kentucky.