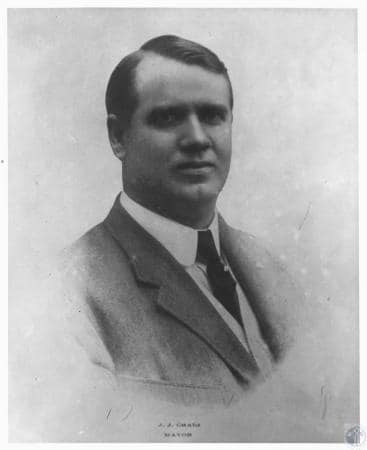 Mayor of Covington and Republican Party Chairman. John J. Craig was born on November 14, 1873 in Covington, Kentucky. His parents were A. John Craig, an Irish immigrant, and Anna June Davis Craig. John J. Craig attended the Covington Public Schools and graduated from Covington High School. Following graduation, Craig began working in his father’s contracting and building company. Craig married Ella M. Griffith. The couple had three children. Craig was a staunch Republican who held several political officers. For four years he served as Covington City Clerk. In 1907, He successfully ran for the office of Mayor of Covington. He held that post from 1908-1911. One of Craig’s main campaign issues was gambling. After he was elected, he was consistently criticized for not doing enough to close gambling establishments. In 1911, he unsuccessfully ran for the post of Kentucky Railroad Commissioner. In 1912, Craig’s daughter, Mary Jane, died of diphtheria. His wife, Ella M. Griffith Craig died on November 26, 1915. John J. Craig married Mattie Laws of Walton, Kentucky in 1918. By this time, Craig was living in a home at 2128 Oakland Avenue in Covington. John J. Craig again ran for the office of Covington Mayor in 1907. Craig served this second term as mayor from 1916 to 1920. Craig was appointed Kentucky State Auditor by Governor Edwin P. Morrow in 1919. He held this office until 1923. Craig ran for a third time for the post of Covington Mayor in 1923. This time, he was defeated. The last position held by Craig was Master Commissioner of Kenton County (1927-1930).

Craig was also very active in the banking industry. He was on the Board of Directors of the First National Bank of Covington and was Vice President of the Citizens Building Association of Covington for two decades. In addition, Craig served on the Board of Directors of the Highland Cemetery Association. Craig was also counted as a member of the Covington Eagles, the Elks, the Covington Chamber of Commerce, the Knights of Pythias, the Knights Templars and the Masonic Temple. John J. Craig died in his home on September 23, 1930 at the age of 56. He was survived by his second wife, Mattie Laws Craig and three children: John J. Craig Jr., Florence Craig Schramm and Virginia Craig McLean. Funeral services were conducted in the family home by the Reverend Homer Baumgardner, former Pastor of the Union Methodist Church in Covington. Burial was at Highland Cemetery in Fort Mitchell, Kentucky. One of those who attended the funeral was Kentucky Governor Flem Sampson.