Walter H. Haupt was the long-time pastor of St. John Congregation Church in West Covington. Haupt was born on December 27, 1896. He served in the United States Army Signal Corps during World War I. Beginning in the 1930s, he worked as an engineer at the Kelley-Koett X-Ray Company in Covington. He retired from Kelley-Koett in1973. During the 1930s, he was very active at St. Peter’s German Church in Cincinnati, where he occasionally preached 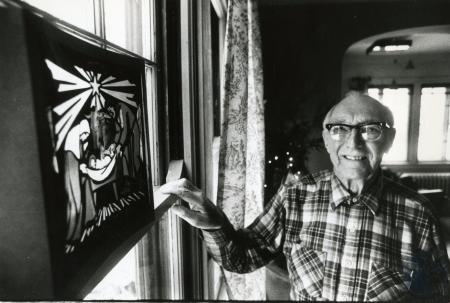 . In 1938, St. John Congregational Church in West Covington was looking for a minister. The board approach Haupt and asked to him to preach and conduct services at their church for two consecutive weeks until a new minister could be found. The congregation was so impressed with Haupt, that they offered him a permanent position as pastor. He agreed, and remained in that position until his retirement in 1973. Walter Haupt was eventually ordained by the church. For many years Walter Haupt lived in Ludlow, Kentucky on Ludford Street. Later in life, he moved to the Kenton Hills neighborhood of Covington. He died on March 7, 1994. Funeral services were conducted at St. John Congregation Church. Haupt’s wife, Lucille, proceeded him in death. He was survived by two sons: Conrad Haupt and Richard Haupt.