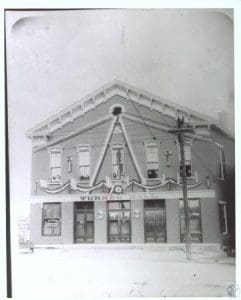 In 1855, a number of German residents of Covington gathered together to discuss the establishment of a Turner Society in their city. The society was officially established on September 13, 1855. Members had to agree to the following: Oppose all laws calling for the prohibition of alcohol, not to vote for any member of the Knownothing Political Party, and to oppose the institution of slavery.

In 1857, the Covington Turners acquired a home on Pike Street. These new facilities included an area for exercise, a saloon and meeting rooms. The outbreak of the Civil War, however, nearly dissolved the society. Many members joined the Union Army and marched off to war. By 1864, only seven Turners remained in the organization. Following the war, membership again increased. In 1870, a new building was acquired for the society at the corner of Pike and Ninth Street.

During these years, the society sponsored singing events, gymnastic training, political debates, rifle shooting contests and various classes. A junior section was also established to ensure that young Germans were being properly trained. In 1877, the society began planning for the construction of a permanent hall. On May 10, 1877, the cornerstone of the new building was officially set into place. The new hall was dedicated on October 1, 1877.

In the early years of the society, the wives and mothers of the members assisted the men at society activities. In 1899, the first official Women’s Auxiliary was established. The founders of this group were: Mrs. P. Spahn, Mrs. William Riedlin, Mrs. H. Rauch, Mrs. Charles Mahlmann, Mrs. Al Welling, Mrs. R. Welling, Mrs. R. Elster, Mrs. William Brossenne and Mrs. Charles Preiss. Members of the Women’s Auxiliary were instrumental in the planning for the golden jubilee of the Covington Turner Society which was celebrated in 1905. At that time, membership stood at 150.

The use of the German Language was discontinued at the Turner meetings in 1915. That same year, the Turner Hall was hit by a tornado. The roof of the building was blown off, all the windows were broken and the balcony in the main hall fell to the lower level. Work to restore the hall amounted to $3,000.

The society financed a number of improvements to their facility in 1928. A new heating system was installed, a shower facility was built and the main gymnasium was expanded by the removal of the stage. These improvements amounted to the sum of $16,194.45.

Society members faced the 1937 flood with courage. Water reached the basement of the hall and did much damage to the children’s areas. The gymnasium was used to store furniture of the residents who lived near the hall. The upper hall was used by the Red Cross as a relief center. The Women’s Auxiliary set their efforts of feeding the refugees. They served over 500 sandwiches to those in need.

The 1950s witnessed great change for the Turners. Membership dropped as Covington residents began moving to the suburbs. On a more positive note, women were accepted as full members in 1950. This decision increased membership and provided a greater stability within the organization. In 1955, the 100th anniversary of the Covington Turners was celebrated with appropriate festivities.

During the 1960s and 1970s, the Turners sponsored both basketball and baseball teams for youth. In 1967, a youth club was established. These efforts brought new life to the society.

In the years following World War II, many Turner Societies across the United States have closed their doors. The Covington Turners have fought this trend. The group has adapted over the years and continues to thrive. Turner Hall on Pike Street remains a concrete reminder of Lewisburg’s rich German Heritage.