The Sisters of St. Benedict, a Catholic order of women religious, arrived in the United States from Eichstadt, Bavaria in 1852. Their first foundation in this country was at Erie, Pennsylvania. In 1859, Bishop George A. Carrell invited the sisters to send a few of their members to Covington to teach in the parish schools and to open an academy. The first group of sisters to arrive in Covington were Sister M. Josephine Buerkle, Sister Mary Anselma Schoenhofer and Sister Ruperta Albert. Sister M. Alexia Lechner and Sister Salesia Haus came to Covington soon thereafter. Sister M. Alexia Lechner was appointed the first superior of the Covington community.

Initially, the Sisters of St. Benedict were housed in a small cottage on Bush Street in Covington’s eastside neighborhood. By 1860, a new two-story brick convent was ready for dedication on East 12th Street near St. Joseph Church. The convent was named St. Walburg Convent. Additions to the convent were completed in 1867 and again in 1877 to house the growing number of sisters. The first Covington woman to enter the order was Helen Saelinger who became know as Sister Walburga. The sisters’ first activity in Covington was teaching at St. Joseph Parish School. 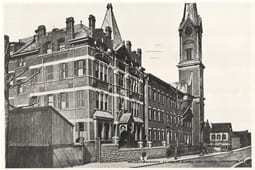 The sisters established St. Walburg Academy in the convent building on East 12th Street in September 1863. The academy operated as an elementary school for young women. Later, a high school program was added at the academy. In 1890, a separate academy building was constructed on a lot west of the convent. The school offered a complete academic program which emphasized art and music. Eventually, St. Walburg Academy was accredited by Catholic University of America, the Commonwealth of Kentucky (Class A) and the Southern Association and Secondary Schools and Colleges (Class A rating). The first student to complete the twelve year program at St. Walburg Academy was Jennie E. Dillon who graduated in 1877.

In 1903, the Sisters of St. Benedict in Covington purchased a farm in the present day City of Villa Hills (a few miles southwest of Covington). On this property, the sisters established Villa Madonna Academy, a boarding and day school for young women. The new Villa Madonna Academy building was dedicated in May 1907.

In 1916, the novitiate (training school for young women wishing to enter the order) was moved from St. Walburg Convent on East 12th Street to the Villa Madonna property.

Five years later, in 1921, the Benedictine Sisters established Villa Madonna College. The college was accredited by the Commonwealth of Kentucky in 1923 and was open to both the sisters and to lay women. In 1928, the Benedictines cooperated with the Sisters of Notre Dame and the Sisters of Divine Providence to open a new diocesan college. This new teachers college was located in the St. Walburg Academy building on East 12th Street in Covington and operated under the Villa Madonna College Charter. In 1929, both Villa Madonna Colleges were merged at the East 12th Street location. In 1931, St. Walburg Academy closed to make room for the growing college program. The last graduates of the academy were: Margaret Koors, Ruth Kleinbank, Catherine Osseforth, Cecilia Frisch, Loraine Hehman, Jean Von Hoene, Hilda Flickinger and Margaret Fleissner.

In 1968, Villa Madonna College moved from the old St. Walburg Academy building in Covington to a new campus in suburban Crestview Hills. On July 10 of that same year, the last Mass was celebrated in the old St. Walburg Convent. The old convent and academy/college building were demolished.