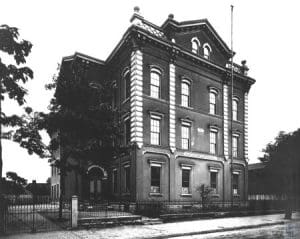 The history of the Second District School can be traced back to the year 1846. At that time, the first building occupied by Second District was constructed in the third ward. The school opened in September 1846 with 72 pupils housed in two classrooms. The schoolhouse was located on Greer Street. By 1951, enrollment had reached 229.

Second District School was replaced by a new building in 1871. The new brick, three-story building was constructed on Robbins Street and contained 18 classrooms. The schoolhouse was designed in the Italianate Style and exhibited decorative hoodmolds over the doors and windows and four decorative pilasters on the main façade. In 1875, the school enrolled 916 students.

The neighborhood surrounding Second District was heavily populated by Germans. The district contained a number of German Catholic and Protestant Churches. Many of these German immigrants wanted their children to be educated in the German Language. The Covington Public Schools accommodated these wishes by establishing a German language program at Second District. The program was so popular, that a waiting list had to be instituted.

Second District School suffered extensive damage from a fire in 1922. The fire began in a coal stove on March 21. By the time the fire department had arrived, the blaze had spread from the basement to the third-story. The total loss amounted to $1,500.

Plans were being made in 1919 to build a new Second District School. Housing inspectors had declared the building to be unsanitary and unsafe on several occasions. These plans, however, were not carried out at this time. The pupils and students would have to wait until 1937, when funding from the Works Progress Administration was provided, before a new building could be constructed. At this same time, the John G. Carlisle Junior High School building at 12th and Russell was also in a dilapidated condition. The members of the school board decided to build a new school on the site of Second District to house both the elementary program (of Second District) and the junior high program. When the new building was dedicated, the name was officially changed from Second District to John G. Carlisle School.