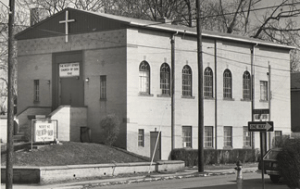 By 1911, there were approximately 35 Jewish families residing in Covington. Most of the people were of Polish or Russian descent. That year, Rabbi Samuel Levinson of United Hebrew Congregation in neighboring Newport, began offering religious services in the Kentucky Post building on Madison Avenue. One of the early organizers of the Jewish community in Covington was Maurice A. Chase. Chase was a physician and native of Odessa Russia. He participated in several uprising in Russia, which eventually led to his exile in Germany. Chase immigrated to New York, and eventually made his way to Covington.

Covington’s fledgling Jewish community began plans to build a synagogue in the city in 1912 with the purchase of a lot at 7th and Greenup Streets. A building committee was established in 1913 with the following officers: Meyer Berman (President), Oscar Levine (Vice President), L. Gorshuny, Max Stampil, I. Simon, M.E. Chase, H. Lifschitz, A. Gross, M. Meisel and J. Ginsberg. The new synagogue was ready for occupancy in 1915. The two-story Classical Style structure designed by architect George Schofield was topped by a cupola. The first floor contained a kitchen, classrooms and living quarters for a caretaker. The worship space was located on the second floor and contained separate areas for men and women. The new structure was called Temple Israel. 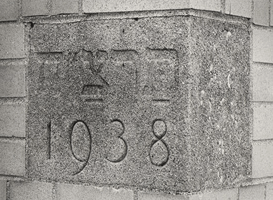 Rabbi Levinson, a Lithuanian Jew, served the Newport and Covington Synagogues from 1911 until 1923. From 1923 until his retirement in 1929, he served the Covington congregation only. He was succeeded by Rabbi Jacob Jacobs. The early Covington Jewish community followed Orthodox customs and worship. Some kept kosher kitchens while others did not.

Temple Israel suffered a severe blow during the Great Depression. The Federal Government decided to build a new Federal Building and Post Office in the mid 1930s. Officials decided on a location on Scott Street between 7th and 8th Streets (The site of the synagogue). Temple Israel was condemned in 1937 and demolished in the following year. The congregation purchased a lot at 1040 Scott Blvd. as a site for a new building. The new Temple Israel was dedicated on March 19, 1939. The simple two-story brick building cost $20,000 to build. The only exterior adornments were several brick stars of David on the façade. The first floor contained a kitchen, stage and social room. The worship space was smaller than the original one and was located on the second floor. The facilities also included a three-room apartment for the caretaker.

Beginning in the late 1930s, many of the Jewish families of Covington began leaving the city. Quite a few relocated to Cincinnati. As a result, membership in the congregation began to fall. This trend continued throughout the 1940s and 1950s. Membership declined to such an extent that services could often no longer be conducted due to the lack of a quorum (10 male members needed to be present for worship). In time, only high-holiday services were held in Covington. By the mid-1960s, Temple Israel in Covington ceased to function as an active congregation. The Temple Israel building was sold to a Church of God Congregation for $9,400 in 1973.