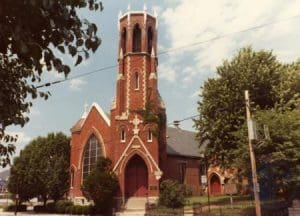 The first Episcopal services were conducted in Covington on May 8, 1842. These services were conducted by Bishop Benjamin Bosworth Smith, the first Episcopal bishop of the Diocese of Kentucky. The tiny congregation met in a small frame building at the corner of 5th and Madison Avenue. At a meeting held on November 24, 1842, the congregation voted to establish a parish under the name of Trinity Church. At the same meeting the following gentlemen were appointed to the vestry: John K. McNickle, Charles A. Withers, George M. Southgate, John W. Stevenson, J.W. Venavle, J.L. Newby, Jackson Sparrow, J.W. Clayton and Thomas Bird. The new congregation was accepted by the diocese on May 11, 1843.

The first pastor of Trinity was the Reverend Green Moore. Under Reverend Moore’s guidance, the vestry purchased a lot on Madison Avenue as a site for a new church building. The cornerstone for the new building was set into place on June 24, 1843 and the first services were conducted in the structure on June 30, 1844. In the spring of 1844, Reverend Moore also began to care for the Church of St. Paul in neighboring Newport, Kentucky.

By the late 1850s, the congregation had outgrown their original structure on Madison Avenue. In 1859, additional lots adjoining the church property were purchased and plans for a new brick church were drawn. The new edifice went up quickly and was consecrated by Bishop Smith on March 1, 1860.

Trinity expanded its mission in 1869 by establishing two mission congregations. One of these missions was located in Milldale (present day Latonia neighborhood). A mission chapel was erected in the community on a lot donated by Mr. George W. Jones. The chapel was ready for occupancy on February 13, 1870. Trinity Church also allocated $400 for Mission work in the neighboring City of Ludlow in 1869. The mission was called the Chapel of the Redeemer. Services were held in private residences, and later in the First Baptist Church, which was rented for that purpose.

The facilities of Trinity Church continued to be improved. In 1886, architect Louis A. Picket began designing an addition to the church building. This guild hall was completed in November 1886. Picket also designed a new façade for the church on the Madison Avenue side of the building. On Thanksgiving Day 1888 the new façade, featuring a 103’ bell tower with 10 chimes and a round baptistry, was dedicated. The bells ranged in size from one ton to 200 lbs with the four largest dedicated to the Evangelists Matthew, Mark, Luke and John. The bell tower was a gift of John W. Baker and the baptistry a gift of Howell Louis Lovell.

In 1890, the vestry of Trinity purchased a lot at the corner of 18th and Scott Streets in Covington for the creation of a new mission congregation called St. John. The first services were conducted in the new St. John Mission building on December 26, 1890. The mission church was decorated primarily with gifts from Christ Church in Cincinnati including nine double art glass windows, a triple art glass window and 80 pews. Trinity lost 85 members to begin the new congregation. St. John Mission became an official parish separate from Trinity on January 30, 1894.

In 1921, the vestry approved the purchase of a home at 316 Garrard Street In Covington to be used as a rectory. Ten months later, however, the home was sold and a new rectory was purchased on Beechwood Road in suburban Fort Mitchell. The 1920s also witnessed the merger of Trinity and its former Mission St. John Episcopal at 18th and Madison Avenues. The merger became official on March 15, 1925. The St. John property was eventually sold to the Salvation Army.

Trinity Church expanded its facilities and programs throughout the first half of the Twentieth Century. By the post-World War II era, the congregation was facing some difficult decisions. Many of the members had left Covington for the suburban communities of Kenton County. Several other Protestant congregations had already decided to abandon their Covington locations and rebuild their churches in the suburbs. The members of Trinity, however, took another course. The vestry decided to remain at their Madison Avenue location and to try and make a difference in the ever changing urban environment. In order to house the growing number of programs sponsored by the congregation, a large addition was constructed to the church facilities between 1959 and 1962. This modern brick structure contained offices for the clergy, a library, classrooms and a memorial room dedicated to the Girl’s Friendly Society. The interior of the church was extensively restored and parking facilities were added. In 1982, the church complex was added to the National Register of Historic Places in recognition of its architectural and community significance.