A permanent Federal Building/Post Office in Covington was under consideration in the post-Civil War era. The United States Government allocated $250,000 for the project in the early 1870s. On September 25, 1875 a plot of land measuring 167 x 150’ was purchased by the treasury Department for $30,660.55. This lot was located in the block bounded by Scott, Court, 3rd and Park Place. 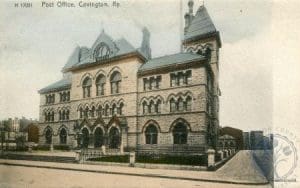 The building was designed William Appleton Potter, Supervising Architect of the United States Treasury Department. The 3-story structure was built of native limestone on 3’ thick foundations. The exterior was decorated with intricate stone carvings and an ornate mansard roof. The interior included woodwork of ash, fruitwood and oak; marble columns and detailed molded plaster friezes in the courtrooms. The cornerstone of the building was set in place on July 4, 1876 , the centennial of the Declaration of Independence. Total cost of the structure amounted to $264,231.01.

The Federal Building housed both the Covington Post Office and the courtrooms of the federal courts. The building was used for this purpose until 1946 when a new structure was built on Scott Street at 7th. The modern three-story stone and marble structure was designed by Louis A. Simon and Thomas Harlan Ellett. The cost of the new Federal Building was $605,000. The façade was ornamented with two sculptures by artist Carl L. Schmitz. These sculptures were titled, “Tobacco” and “Horse breeding”. The foyer of the new building featured a sculpture of “Justice” executed by artist Romuald Kraus. The old 1876 structure was sold to Kenton County in 1941 for $15,000. The building then became home to the Kenton County Vocational School . The vocational school remained at this site until June 5, 1962 when their new facility in Devou Park was dedicated.

The new Federal Building on Scott Street at 7th was enlarged in 1969 at a cost of $835,000. The architect was Fisk-Rinehart & Hall-McAllister-Stockwell. By the late 1980s, however, this building was inadequate to serve both the needs of the post office and the courts. United State District Judge William O. Bertelsman began campaigning for the construction of a new building in Covington to house the Federal Courts. Property was acquired on West 5th Street between Madison Avenue and Russell Street in 1995 (on the former site of Notre Dame Academy ). The new structure was designed by the Lexington architectural firm of Sherman-Carter-Barnhart. Plans called for a five-story 108,958 square foot building housing five courtrooms, judges’ chambers, marshals’ offices, probation office, law library, bankruptcy court and space for the clerk. The building contained modern security features and was wired for 21st Century computer use. Judge Bertelsman broke ground for the new courthouse on July 21, 1997 , and the new building was open for business in August 1999. The total construction cost reached the sum of $22 million, nearly $1 million under budget. The old Federal Building on Scott Street was turned over entirely to the United States Post Office.