The City of West Covington never sponsored a volunteer fire department. Instead, the city relied on neighboring departments. When West Covington was annexed by Covington in 1916, one of the biggest selling points was coverage by the Covington Fire Department. Following annexation, plans were made to build a firehouse in the West Covington neighborhood. Originally, plans called for the building to be constructed on Highway Avenue. These plans were changed in 1933. The new firehouse was constructed at the intersection of Altamont and Parkway Avenue. The building had one bay and contained living and sleeping quarters for the firefighters. The building was completed in January 1934 and was built at the cost of $10,000. 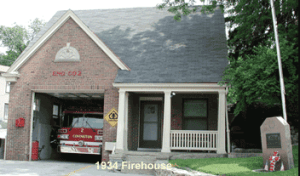