The West Covington Public School was established in 1858 with L.M. Strafer as the first teacher. At this time, the school was administered by the City of West Covington. In 1869, the first school trustees were elected. The earliest known school building was a two-room frame structure located on Main Street (now Parkway) near the intersection of Douglas.

In 1875, 100 students from the area attended the school. Two teachers were on the faculty: Miss J. McKenna as principal and Miss Kitty Sweet as assistant teacher. By this time, the school building had outgrown its usefulness. The structure was too small and in a dilapidated condition. The building was not only being used for school purposes, but also as a town hall, and community center.

The school trustees agreed to construct a new school building in 1876. In August of that year, the board sold the old school to a Mrs. Clare for $200. Mrs. Clare agreed to move the structure to a lot she owned in the city. The children continued to attend school in this building until the new structure was completed.

On the original schoolhouse lot, a new brick structure was built at the cost of nearly $5,000. The building was designed to house both the school and the city hall. Work on construction began in September 1876. The cornerstone for the building was officially set in place on October 16, 1876. The event included brass bands, a torchlight procession, a bonfire and fireworks. At this time the population of the town had a strong Irish component. The songs played at the ceremony included, “St. Patrick’s Day,” “Rory O’More,” “Our Country Tis of Thee,” and “Hail Columbia.” The children occupied the new building in the early days of 1877.

The Covington School Board began studying the replacement of the 1876-77 Eleventh District School in 1919. The school district purchased nearly 5 acres of property adjoining the old school building. The purchase price was $5,800. The Columbus, Ohio architectural firm of Richards, McCarty & Buford, designed the new school. The Tudor Revival design called for a two-story brick building housing four classrooms on each floor. The new Eleventh District School was dedicated on September 23, 1923. In 1924, the Covington School Board sold the old schoolhouse to the Morning Star Lodge Knights of Pythias.

West Covington continued to grow throughout the 1920s. This growth greatly increased enrollment at Eleventh District. By 1929, enrollment stood at 258. In 1931, school officials began planning for the construction of an addition to Eleventh District. West Covington architect Chester Disque was hired to design the addition, which included four classrooms, a library and an auditorium. The addition was officially dedicated on December 18, 1931. The principal at this time was Miss Mary B. Walker. 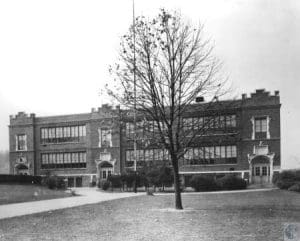 Suburbanization brought many changes to the West Covington neighborhood. As people moved from the basin area to the suburbs, West Covington’s population declined. By 1976, enrollment had fallen to 200 pupils. Inflation had also taken a toll on the district. Covington School Board officials began discussing the closure of Eleventh District School in 1976 as a cost saving measure. At this same time, the United States Department of Health, Education and Welfare ordered that Eleventh District be integrated or the district would lose federal funding. At this time, enrollment at Eleventh District was entirely white. A majority of the Covington School Board voted to close Eleventh District School. Before the closure could occur, however, the residents of West Covington were able to elect a number of sympathetic members to the board. This new board voted to keep the school opened. This reprieve, however, was short lived.

In 1978, the Covington School Board was again ordered to integrate the schools in the district or lose over $1 million in federal funding. The board had no choice but to close the school. By this time, enrollment had fallen to 186. The Eleventh District School closed at the end of the 1978-1979 school year. Most of the pupils living in the West Covington neighborhood were bused to First District School.

Eventually, the Eleventh District School was sold to a developer who remodeled the building into apartments.