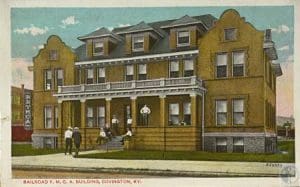 The need for additional Y.M.C.A. facilities for the men of Covington who worked for the area railroads became apparent in the late 1880s. In 1890, 218 Covington railroad employees petitioned the Y.M.C.A. to establish a railroad branch in their community. The petition was accepted, and in the summer of 1890 a structure containing 10 rooms at 65 West 15 St Street was acquired for this purpose. The new Railroad Y.M.C.A. was officially open for business on September 29, 1890. The Railroad Y.M.C.A. offered shower facilities and bathtubs, social activities, educational classes and religious services to its members.

By 1894, classes were being offered at the Railroad Y.M.C.A. in mechanical and architectural drawing, Bookkeeping, business arithmetic, commercial law and history. Membership had increased beyond 200 and the building on 15th had become too small.

In 1906, the Chesapeake and Ohio Railroad donated a lot to the Railroad Y.M.C.A. at 1621 Madison Avenue as a site for a new building. The C & O also agreed to donate $7,000 toward the building fund. These gifts encouraged the Covington Y.M.C.A. administration to begin a fundraising campaign. The campaign began in June 1909. Richard Pretlow Ernst agreed to lead the effort. He was assisted by ten teams of men. A goal of $12,500 was set. On June 29, 1909, the campaign officially reached its goal, having raised $13,081.

With funds in hand, work on the new Railroad Y.M.C.A. began. Plans were drawn by the architectural firm of Scholfield and Walker. The structure was officially dedicated on November 26, 1909. The new three-story brick structure contained a lobby, meeting room, billiards room, offices, dining room and kitchen on the main floor. The basement of the structure housed seven shower facilities and three bathtubs. The second and third floors contained a large classroom, nine double bedrooms and seven single bedrooms. The fees to rent a room amounted to .10 for members and .25 for non-members.

In 1940, the Covington Railroad Y.M.C.A. celebrated its 50th Anniversary. At that time, over $5,000 was spent to improve the physical facilities. The decline of railroad jobs in the post-World War II era played havoc on the membership rolls of the Covington Railroad Y.M.C.A. Fewer men were using the facilities, and the age of the building resulted in high maintenance costs. Covington Y.M.C.A. made a decision to close the Railroad Branch in October 1958. Former members of the Railroad branch were welcome to attend the activities of the main Covington Y.M.C.A.