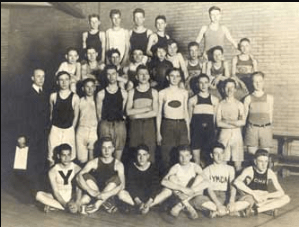 A drive to raise funds for a new Y.V.C.A. building began in 1910. The goal of this campaign was to raise $100,000. The goal was reached due to a number of large donations including an anonymous $35,000 bequest, a $5,000 from Mr. and Mrs. Richard Pretlow Ernst and a $5,000 donation from the estate of Bradford Shinkle. Many smaller donations were given by hundreds of Covington residents.

A site at the southeast corner of Madison and Pike Streets was selected for the new building. The site was preferred because it was located in the heart of Covington’s business district. Before construction could begin, the buildings on the site had to be demolished, including the old Magnolia Hotel. Construction began in the summer of 1911. The completed structure offered many amenities that had not been previously available. The brick building with stone trimmings stood three-stories tall and faced Madison Avenue. The main floor (2nd floor) contained a formal lobby with marble floors and walls. Other facilities located on the main level included: offices, a large reading room complete with a fireplace, a billiards room, a correspondence room for businessmen, a dinning hall and kitchen. The third floor contained 39 private dormitory rooms, each complete with a bed, dresser, table, two chairs, and closet. This floor also housed a large bathroom with four showers, sinks and toilet facilities. The basement level contained locker rooms and shower facilities as well as a swimming pool measuring 21 x 60’. The facility also featured a large gymnasium complete with an elevated running track. The people of Covington could be justly proud of their new Y.M.C.A. building.

The new Y.M.C.A. building was officially dedicated on the weekend of January 30, 1913. The principal speaker on the occasion was Richard Pretlow Ernst, the president of the Covington Y.M.C.A. since 1892. The ceremonies also included an open house for the people of Northern Kentucky.

The entry of the United States in the First World War hampered the activities of the Covington Y.M.C.A. Up until this time, the facilities were only open to men and boys. The war, however, brought about a great decline in attendance and membership. This led the officials of the Y.M.C.A. to open membership in the group to women and girls in 1918. In order to accommodate women’s activities, the boys department was moved to another portion of the building and their previous space was remodeled to serve as locker and washrooms for the ladies.

During the 1920s, membership at the Y.M.C.A. increased. The officers decided that an addition to the building would be necessary. In the spring of 1929, a drive was conducted to raise $150,000 for this addition. The plans called for an addition to the east side of the 1913 building that would house a women’s parlor, a memorial hall (seating capacity of 180), a stage for theatrical performances, clubrooms and a second gymnasium.

The $150,000 goal, however, was not met. Instead, the plans had to be scaled back. To make things even more difficult, the great stock market crash of 1929 occurred within a few months of the drive. Despite these setbacks, the expansion project continued.

The post World War II era was not as kind to the Covington Y.M.C.A. Many more opportunities were available to children and adults for social and recreational activities. In addition, Covington’s declining population due to urban flight resulted in fewer people using the Y.M.C.A. facilities. At a meeting of the five Y.M.C.A. braches of Northern Kentucky on April 1, 1987, the group agreed to merge with the Y.M.C.A. of Cincinnati and Hamilton County in Ohio. At the same time, the group also agreed to sell the Wade Y.M.C. Branch on Madison Avenue in Covington. The building was sold for about $200,000 to the George Budig, president of the George Fern Company.

The loss of the Covington facilities on Madison Avenue did not result in the withdrawal of the Y.M.C.A. from the city. Instead, smaller office space was found and programs and activities were conducted at schools, in community centers and in city parks.